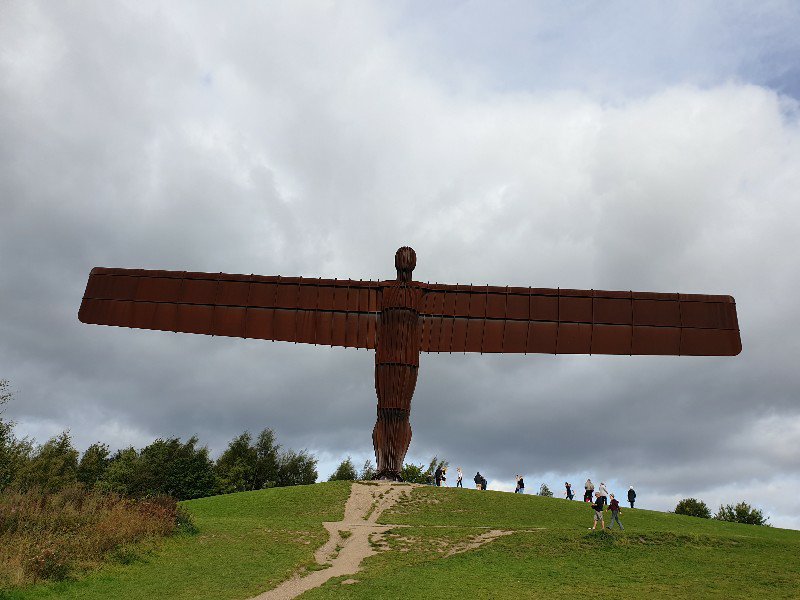 Once we could make journeys and “bubbles” in the UK, I shot down to Hampshire to visit my son and family in July . Later , at the end of August I finally took off for a trip down south visiting friends in Broadway, Ascott under Wychwood, Cheddar, Exmoor, Privett, and Sandbanks and finally home. Completely failed to take any photos !

The next trip a few days later…after I had had a last racing sailing weekend….began with motorcycling friend Jane coming up to Norfolk. We set off the next day slowly making our way in good weather; dry anyway, to Goole via Skegness and much of the Lincolnshire coast. 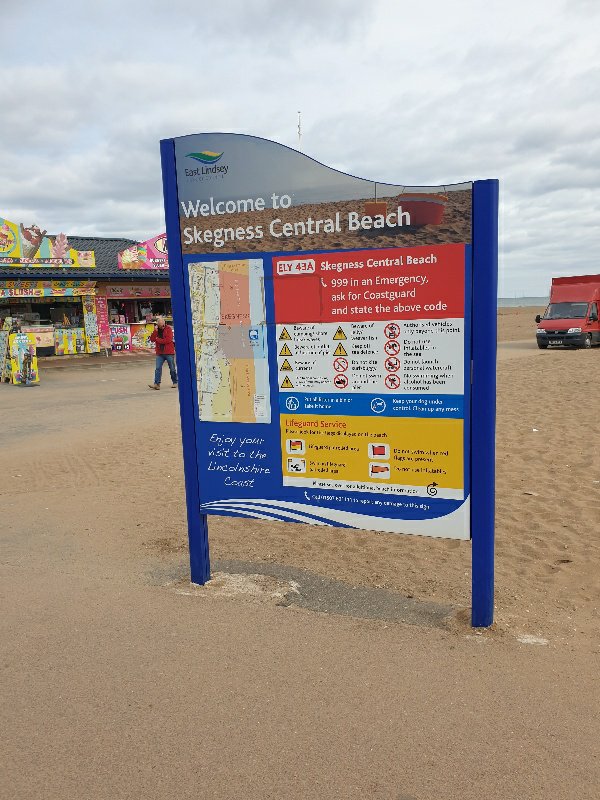 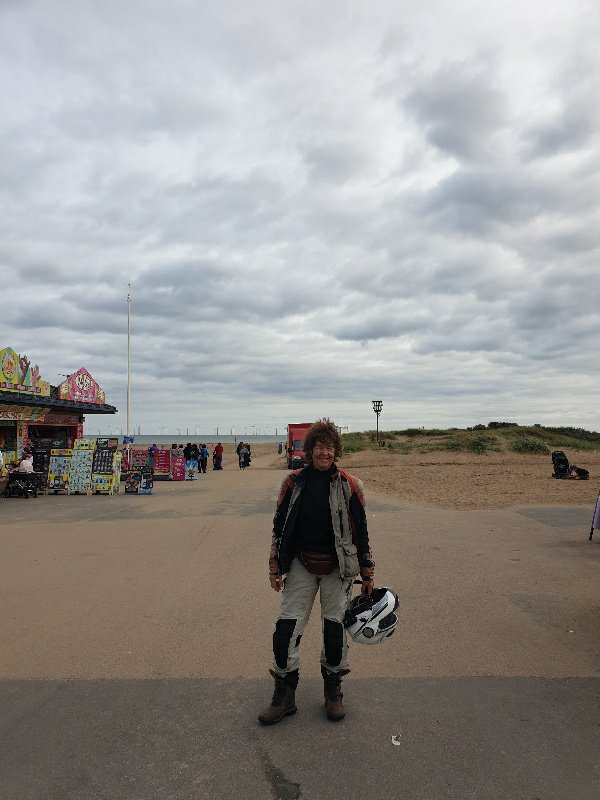 Skegness beach and me. 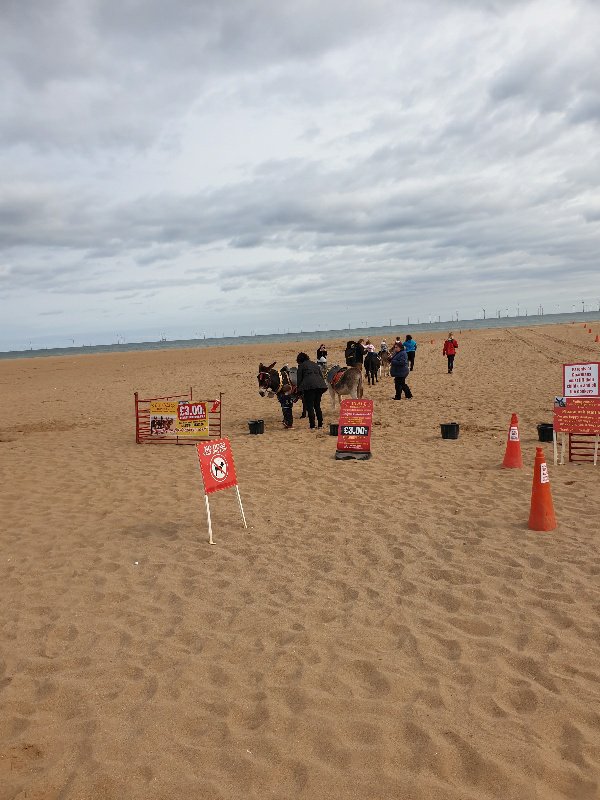 We stayed with some friends of Jane’s near Goole and then it was onwards to Newcastle to meet with more of Jane’s friends. This time a bit of motorway needed and beside the A1M is this….Jane had not seen it, I had with Clive.

The Angel of the North designed by Anthony Gormley. Its just south of Newcastle.

North of Newcastle, by the coast we met the friends and they guided us up the coast showing us little sights.. 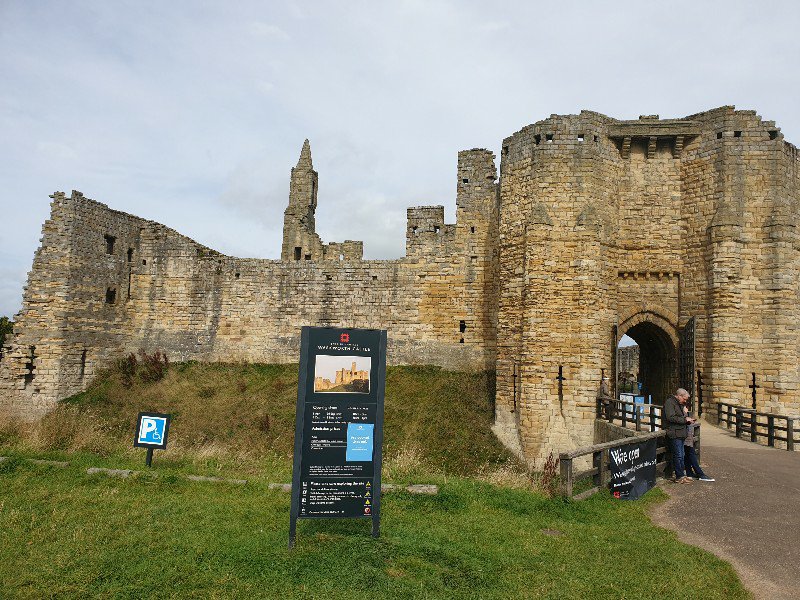 They left us as we turned onto the causeway to Lindisfarne. We had our tide timetable ! You get about 8 hours so no panic of being cut off really. Long causeway , a fair amount of tourists. had to park and then walk.  Jane has a poorly knee so not too much but we managed the old priory and a cup of tea. Lots of one way system walking and careful queue in the open air cafe. 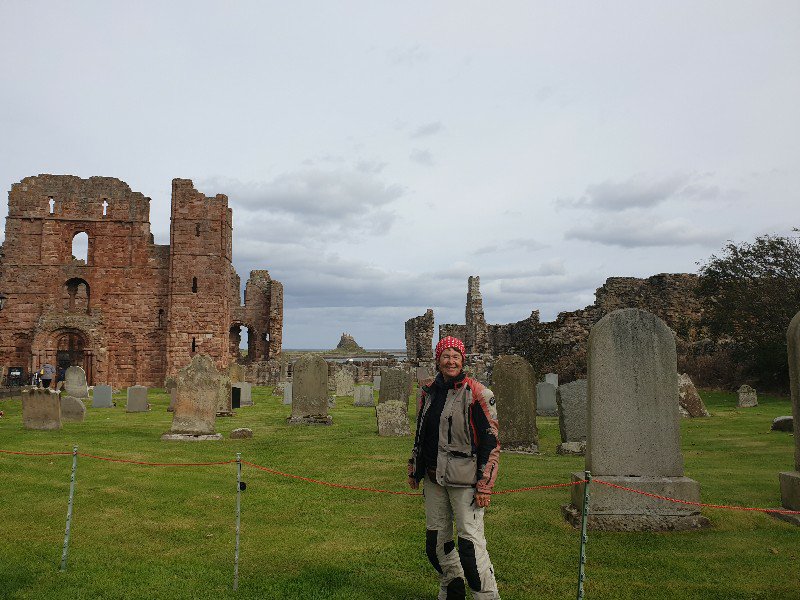 Old priory and in the far background is Lindisfarne Castle. That was shut. I will be back for I would like to walk to that. 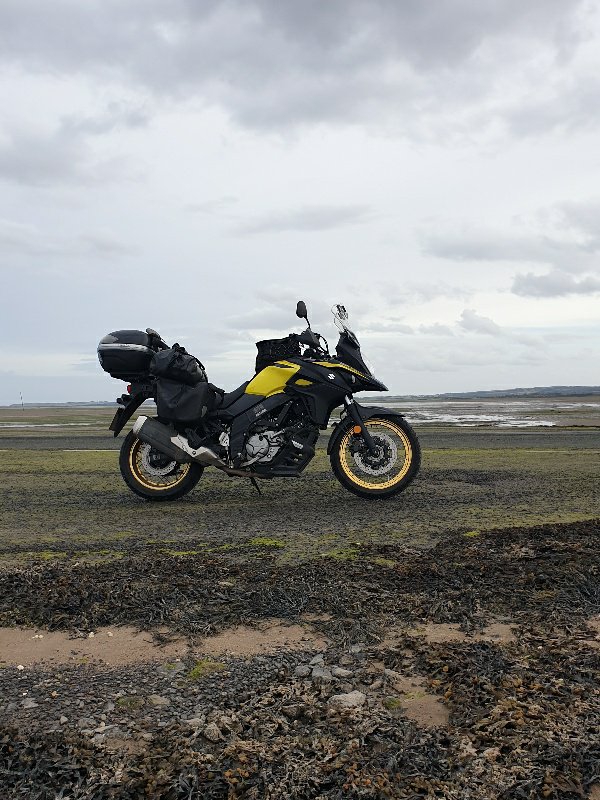 Bike on the causeway.

After a night in an Inn we had an easy distance to go to get to my friends this time who were living in Selkirk. I met Elvie and Jon when they took up jobs picking plums for us in the summer quite some years ago. They are Australians with whom i have stayed in touch. They are an amazing pair having done a great deal in their lives so far. That includes 3 years in a campervan and some years owning a house in Bulgaria. They both motorcycle and Jon once was an australian postie. Now they have emigrated from Australia to the border region of Scotland.

Since we did not have miles to go that day we called in at Floors castle. Castle was shut but we wandered the grounds and garden and had a very pleasant 2 cups of tea in the sunshine just plain relaxing !!

Floors castle is huge! Privately owned by the Duke of Roxburghe. 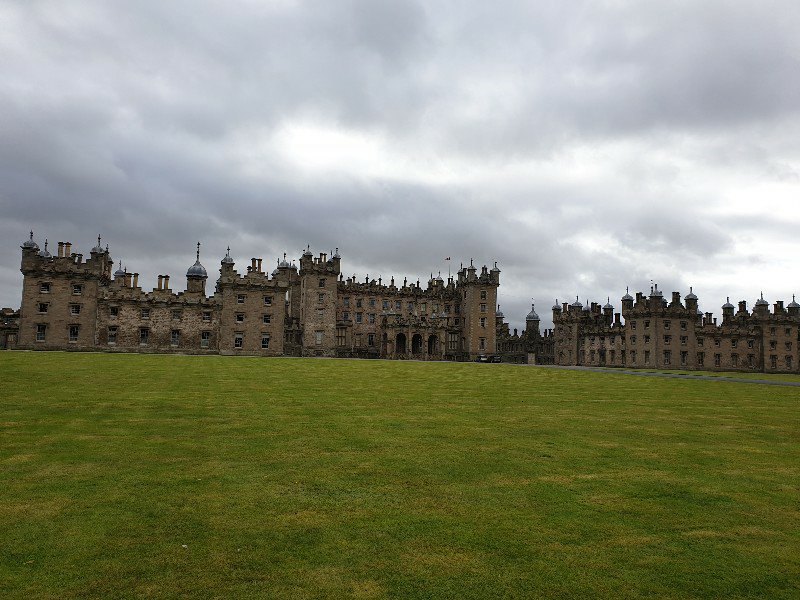 My panoramic photos did not quite work ! But you probably get the gist.

After staying with Jon and Elvie we took a meandering route through the borders to reach Kirkaldy north of Edinburgh on the east side of Scotland. On the way we went to Moffat where we discovered two things. Moffat is famous for toffee and having the narrowest hotel in the WORLD. 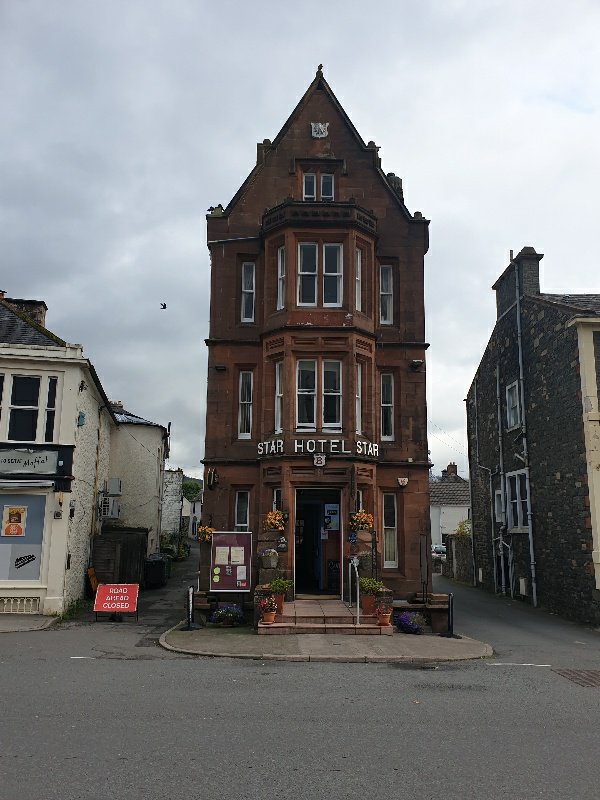 Fantastic road for motorbiking saw us going past these yellow sheep. 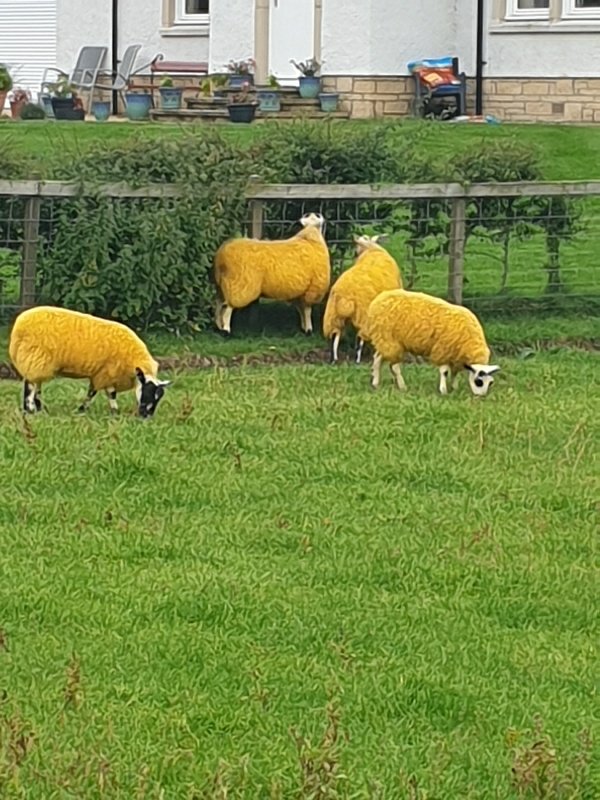 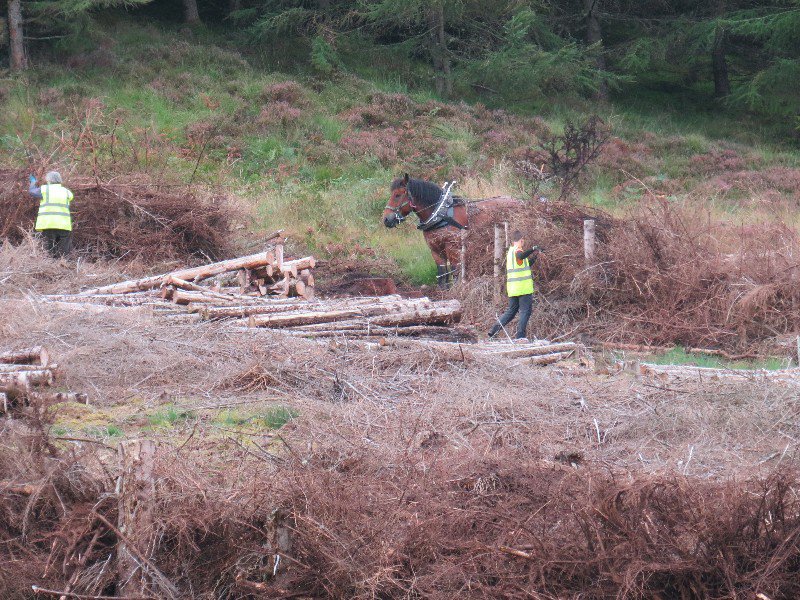 Then we saw these horses working at dragging wood into heaps and generally tidying up the hillside after some felling…real team effort.

On to Kirkcaldy to see and stay with the Valente family. Marco Valente came round the world with us. We had seen Marco fairly recently at Clive’s funeral but not Kenny who also came round the world and lives near Marco. So we had a bit of a reunion meeting family members etc.

The next day Kenny led us up this next bit of the east coast of Scotland as far as St Andrews. Marco had to work at the family businesses of icecream and fish and chips.

In Lower Largo Kenny showed us this.. 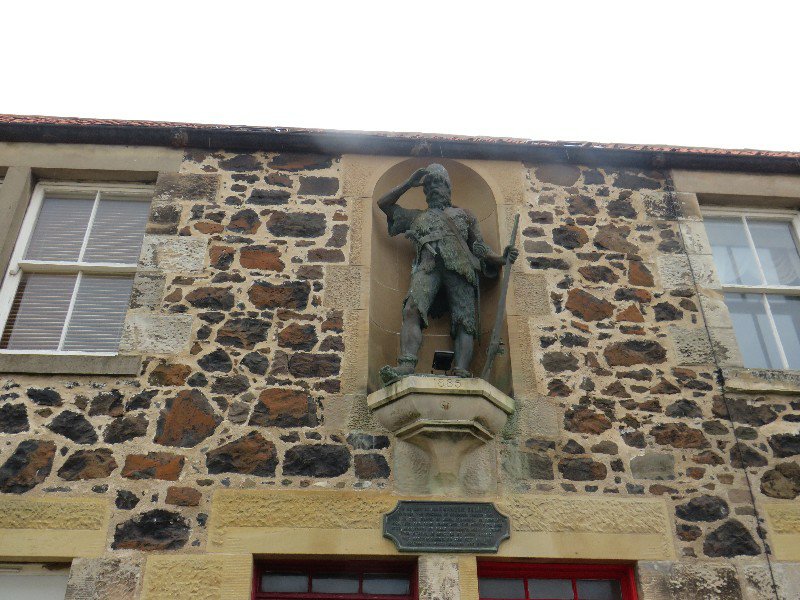 A statue depicting Robinson Crusoe or, as the plaque below reads, a scotsman called Selkirk that inspired the novel by Daniel Defoe. 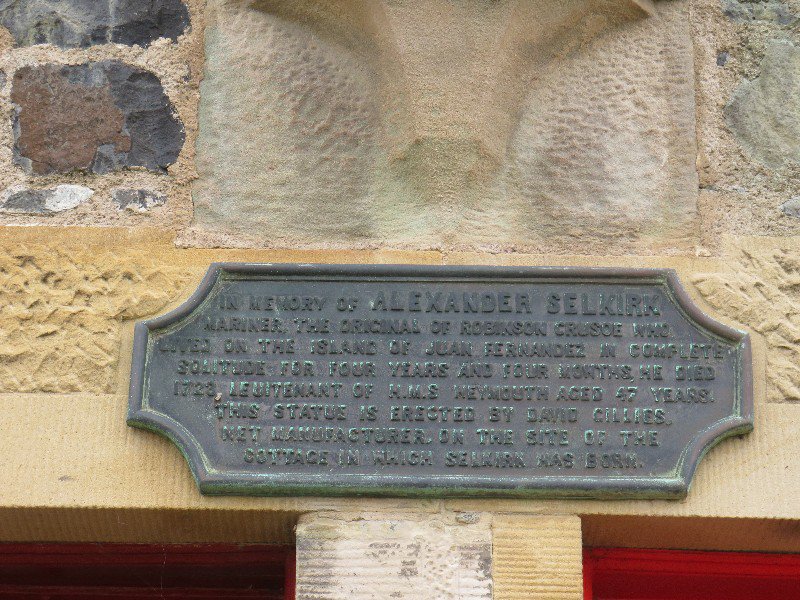 On we went to via Earlsferry ,Anstruther and more to St. Andrews. 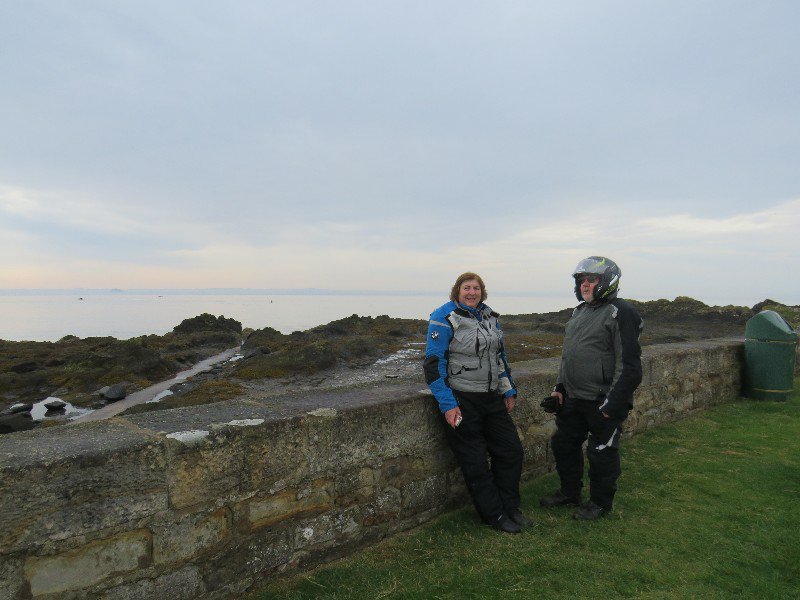 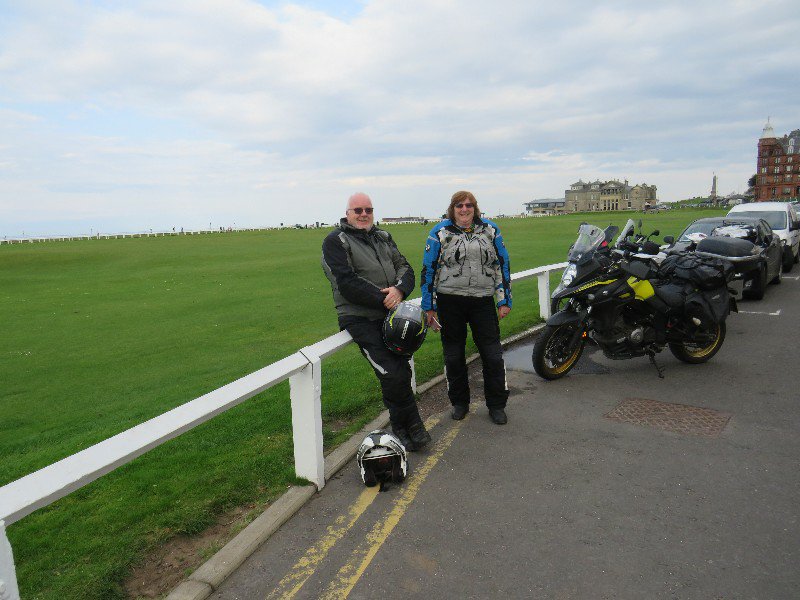 Jane and Kenny in St Andrews.

Kenny then headed home and we stayed the night in a B and B after eating a good meal in an Indian restaurant !

The next little bike trip was to do the Equinox challenge. This was something that had appealed in the middle of the winter. Plan was to ride on the motorbike from Lowestoft …east….to Aberystwyth in the west; seeing the sunrise at Lowestoft in the morning and the sunrise in Aberystwyth in the evening of the same day. We were meant to do this at the equinox in March. But guess what…the virus meant it was cancelled after money was paid over for the two hotels We were to be 30 people. So re scheduled for the September equinox. As the time neared I was going off the idea especially after these last couple of jaunts round the UK. I had paid my money and would lose it if I did not go. I found Lowestoft more attractive that I might have imagined. The beach is lovely, huge with golden sand. There was a nice promenade backed by victorian buildings. Our hotel overlooked the sea and I got my sunrise photo at 6.30am after an early breakfast served by friendly staff who had got up especially early for us. 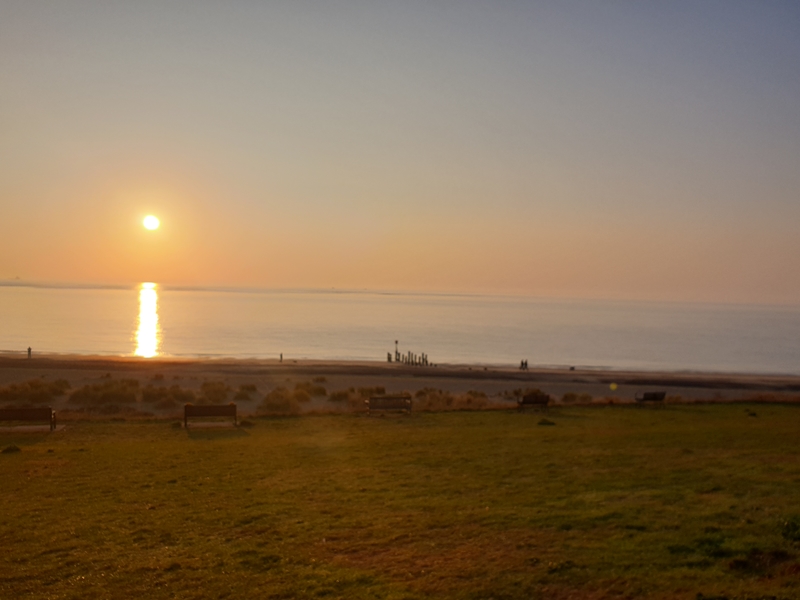 Sunrise in Lowestoft that blessed us with a beautiful morning….Sept 21st

I was put in a group. We were 4 bikes and 5 people ( one pillion). Two bikes were enormous Indian bikes like Honda Goldwings, myself on my Suzuki and another on another Indian which looked  like a street bike. 330 miles to do in twelve hours…sunset at 7.15pm in Aberystwyth. We did not touch motorway and did minimal dual carriageway. One of the large Indians led with me at the back. progress was slow with a number of fairly lengthy stops. We finally reached Stourport with 100 miles to go at 3.45pm. Time was running out with welsh roads ahead. I decided to cut and run and head on without hanging around in Stourport. The GPS said 2.5 hours. That meant 6.30pm. I made it with some hard riding without a stop. 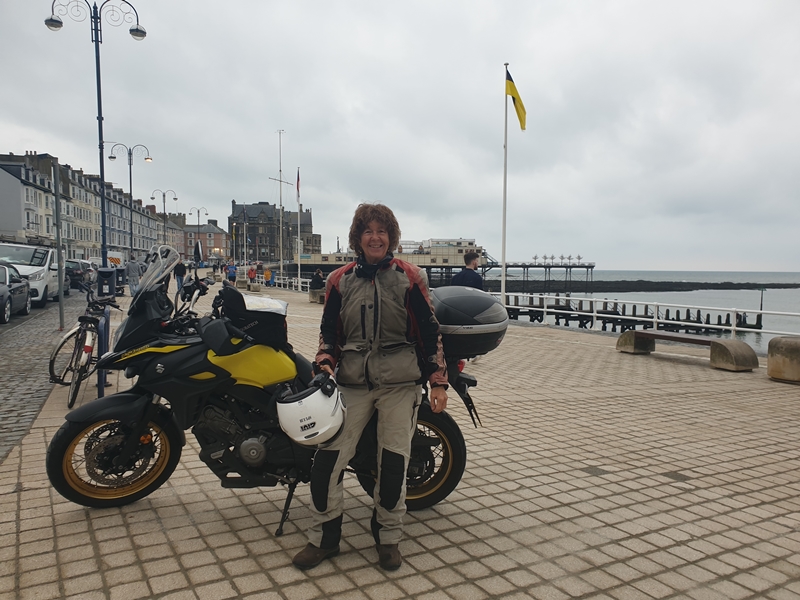 Aberystwyth slightly before sunset, but cloudy.

The welsh hotel was slightly out of town. Splendid old house called Nanteos  Mansions. Huge rooms but food did not really match. 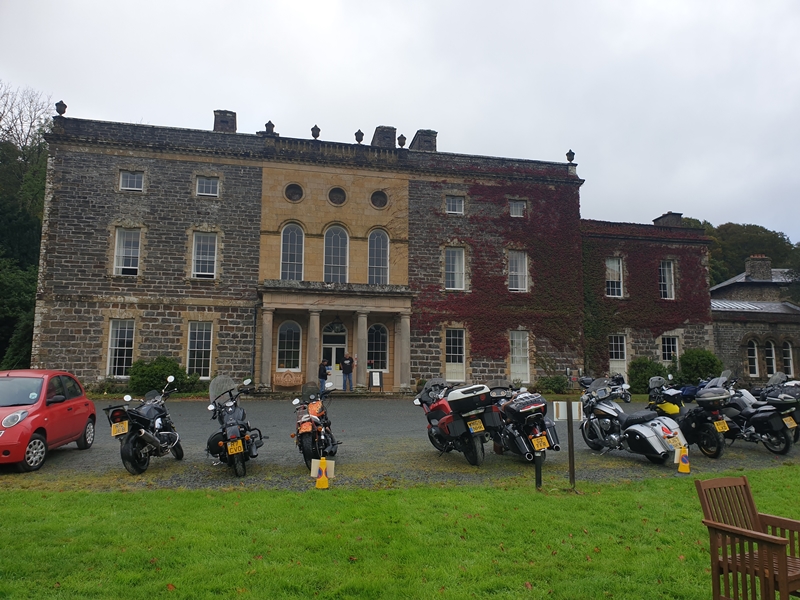 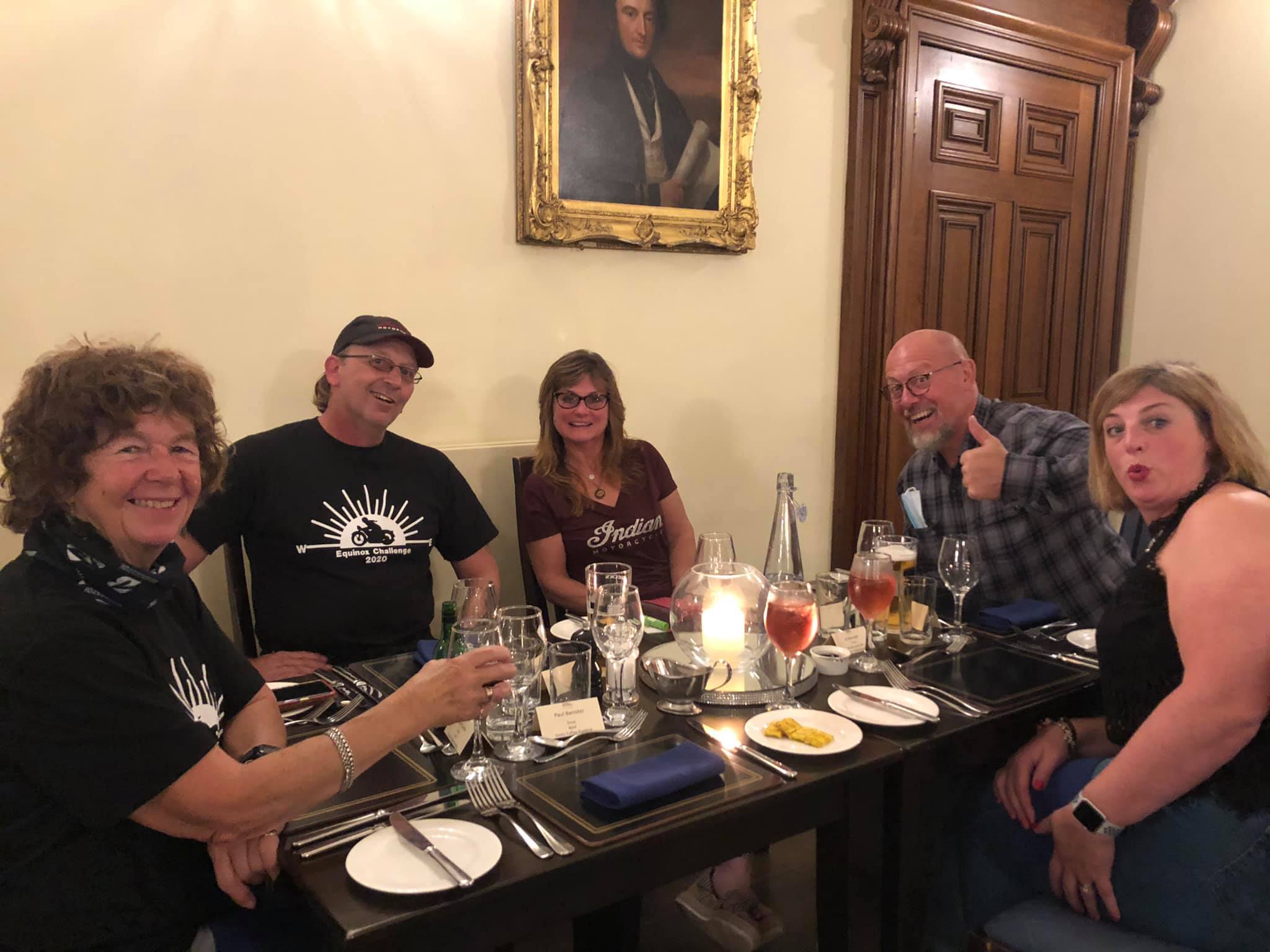 My group…Nina, Mark, Caroline ( she only ate with us), Keith, Jo and Paul who took the photo perhaps!

Next day I rode back home. One stop and a few less miles but it took 5.5 hours and not the 11 hours it took to get there. Weather was quite kind but it did rain as I went round Birmingham on the motorway. Two days later in Norfolk we have had wild weather on the coast with high winds and lashing rain working its way through windows and doors….not motorbiking weather.