This is not strictly motorcycling…it was ebiking. Malta is only 17 miles long so a motorbike is unnecessary in many ways and ebiking gets you around faster than ordinary cycling ( especially with Malta’s hills). The advantage over a motorcycle was less clobber to carry around and bring. The weather was pleasant…20c and …on the whole…. dry.  I wanted a break from November at home and had never seen Malta.

In a wish to go somewhere a bit warmer I thought Malta. Sitting way down near Africa it should be about 20c. I booked an hotel, the flight and hire of an ebike. Off we go…drove car to Heathrow. Motorbike might not be great for travelling back to Norfolk when I land. Could be super cold and it will be dark all the way. So Purple Parking for the car and next door for me in the Premier Inn. Nice easy drive down, parking no problem and 2 mins walk into the hotel. It was very busy. Fell into conversation with a very nice lady…adventurous. Then a Belgian man…owner of a company that invented some magic drain liner. Installing it down some drain at Heathrow. I had already had enough wine when he suggested another glass and he bought a bottle!! Too many glasses later and it was bed.

Up at 5.45am not feeling too good!! Walk round to purple parking for my free ride to Term 5. Hotel would have charged….

All goes very smoothly. Flight good and even got a cooked breakfast. I doze and I between admire the Alps looking great sticking out of cotton wool clouds. It has snowed…

Local bus to the hotel as I have time to waste before check in. Bus 1.50 euros, taxi would have been about 20 euros. Hotel looks OK but I sleep for a while before going for a short exploratory walk. Check out booklets and apps to work out what I am going to be doing. …have plan for tomorrow…that will do. Still rather under the weather from last night and lack of sleep!!

Feeling a great deal more normal. Had breakfast and then a walk to get my ebike. Very nice man at Ecobikes. He suggested I use an app called Bike GPS and if I did he had some routes I could download which would take me on smaller roads. It does seem that the main roads are pretty busy. I have used an electric bike only once for a short while but off I went without more ado on my Venosa Leader Fox. Had it in my head to go to Mdina first. This was a part of one of his routes I had downloaded. 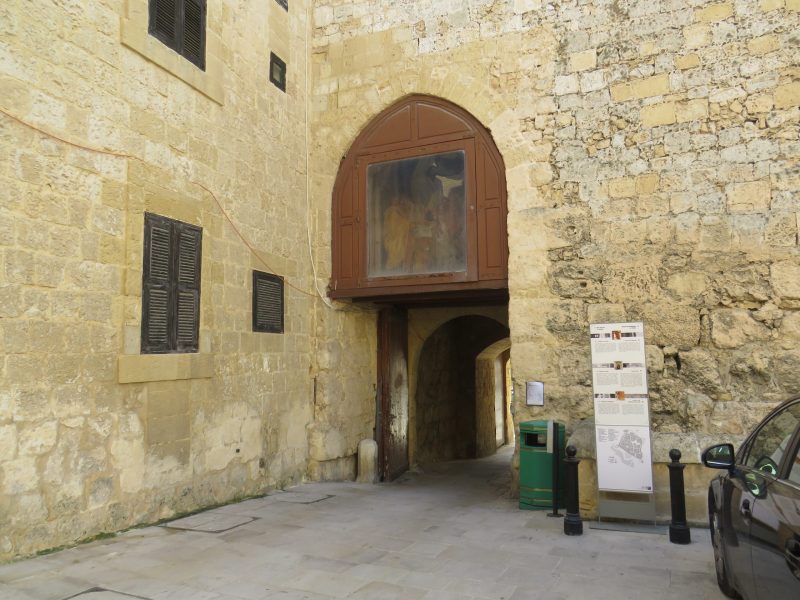 Gate into the Mdina citadel.

Worried that the phone would run out of battery , I did constantly stop to check my route though the app would peep at you if you left it. It is so easy to stop anyway. The electric bike was brilliant. Powered up hills, though one did defeat us. Maybe I had not got into a low enough gear but once you stop peddling you are stuffed. So I had to push the final part. Heavy bike and remarkably steep bit of road soon had me puffing and panting!  I did at least 33 miles that day with ease. Battery on bike had 40% still to go.

In the evening had meal at the hotel bar and it was very good. Not quite found the social hotspot though. One thing to note….not seen so many people smoking in a long time. Guessing cigarettes are cheap here.

Today is good weather and blue sky. Very nice in the sun. Head back to Mdina for I never managed to go down the catacombs. Also saw Mosta Church on the way. Both impressive.

The catacombs went on forever. There were  also  WW11 war shelters dug out underneath. No bodies lie there now!!

Came back to hotel early to thoughts of sitting in sun by the outdoor pool but the sun too low in the sky so I got about 10 mins before sun went too low. So out on bike again to a beach bar still in the sun… toes in the sea and it is not bad temp.. With sun shining a swim I’d very possible. Trouble is this looks like the best day.

Early breakfast and off to Gozo. Ferry times looked up and 8 miles to cycle to the port. Two steep hills but nice downhills and hurtled down to the boat being waved on past the cars and straight in. No hassle, lean bike against a wall of the boat. On to deck and 25 mins later we are in Mgarr Harbour. I am following another downloaded trail from ecobike. Even though Gozo is only 7 miles long this trail is 31.8 miles. With the 8 miles to the ferry and back to hotel that makes 47.8 miles. Battery is meant to last 45 miles at level 5 so should be fine.

Decide to try and complete the circuit in 5 hours…that’s 6 miles to cover in each hour. That will give me one hour for real stops and make ferry (25 mins)  by 3.30pm , 40 mins back to hotel and it is dark by 5pm. Does not give much leeway…but surely 6 miles an hour is very possible?

In the event it was tough. Stopping to view, to find my way etc I only just made it. I did get an hour at the citadel at Victoria which was interesting. I went  wrong and had to back track, hundreds of little tracks. The island is full of mini fields, stone walls and houses. It is quite populated. ! Couple of pretty little spots by the sea and fun seeing the salt pans. The road surface was awful at times and the bike was bone shattering. It has front suspension but did not cope that well. 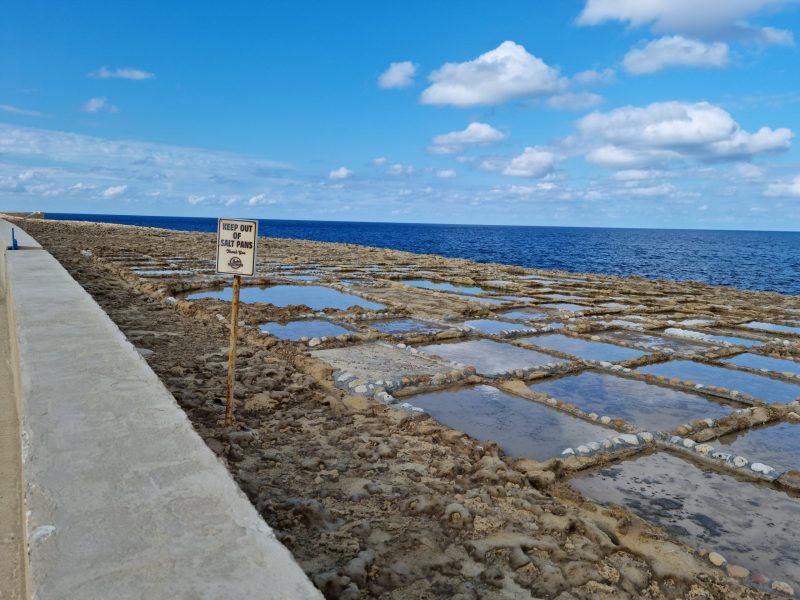 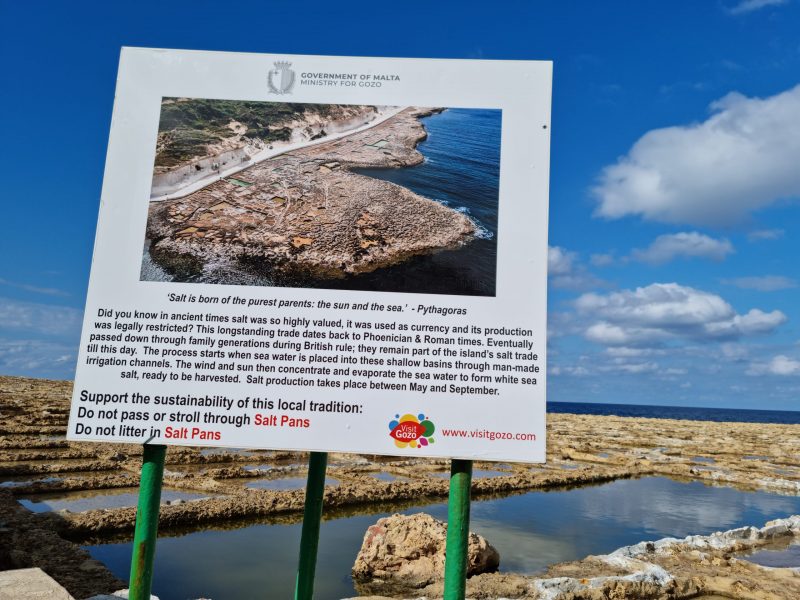 Battery was a worry! Going down faster than was comfortable! Tried very hard to be economical with power but hills were steep. It went into red and it said 20%. I had to reach the port ! I did but knew I had 2 long hills to get up between port and hotel. Set off after ferry but battery died near the bottom of second hill. I had to push the bike about a mile up that hill, it was too steep to pedal even in bottom gear and with the weight of it.

A few more bits of pushing up steep bits and I made it back!! Moments to spare before dark!!

The Maltese language sounds like a mixture of Arabic and Latin  languages which I guess makes sense. They all speak English too. Very friendly and pretty polite drivers. Religion does seem quite big. Cafes are near the church quite often. Church still very much the centre of the village.  Another observation…..people smoking far more than in the UK. I looked up the price of cigarettes and they are a 1/3 rd  cheaper than in England. Explains why many expats and English tourists are smoking.

Forecast not great and thunderstorm in the early hours so having an easy day. Late start and then went back to Ghadira Bay and the town of Mellieha. Plenty of battery power so no worry about the hills. Spot of shopping and explored WW11 bomb shelter which is near and under the church. Very extensive…!!

Up bright and early and off to Valetta….the capital. Named after a Knight!! Malta’s history is full of these warring Christian knights as I was busy finding out today. Brilliant ebike ride all along the coast going in and out of every bay…Salina, St George’s, St Julian’s ( several sub bays) and finally to the Valetta peninsular which contains the St John Co Cathedral and St Elmo’s Fort. Why Co before cathedral I do not know. The cathedral contains at least two Caravaggio paintings…very special..!! Amazing ceiling and interior. The cathedral is in the old citadel.

The place was buzzing and good streets to wander along. Then off to the Fort on the end of this peninsular…strange mass of old walls etc but I learnt from the museum there all about Malta’s history and what they went through in WW11 , some of which I was gathering from the prevalence of underground shelters..!

Never got further before it was time to head homewards. A good day.

My last whole day here. Easy morning shopping a bit and watching locals and expats gather in their groups at the local cafe. Locals seem to banter and the expats….to a man and woman…over weight and old…seem to commiserate with their lot!  Back again to the hotel, jump on the ebike for the last time and head to Gokden Sands. Lovely beach, good weather…sun shines….so on with the bather and swim in the quite cold sea! Wow…follow that up with an Italian aperol spritz at the beach cafe. All very relaxing. I have been amazed by the different languages about me on this holiday…mostly unrecognisable. Maltese language is a mixture of Arabic and Italian! If sounds quite extraordinary. Then I think there are several Eastern block tourists here…Russian, Polish..? None makes any sense to my ear. But all Maltese speak English ! Hurrah!

Rather exciting trip to the airport. I woke to a thunderstorm ! There was no rush but forecast was rain all day….Taxi was 25 euros and bus 1.50 euros. I had come on the bus so knew where the bus stop was. …about 7 mins walk away. I opted for the bus. Packed my bag putting clothes in plastic bags as I knew that the bag was not waterproof and would be on its wheels in the rain. I rolled up my jeans and had flip flops on. A tiny umbrella did the rest. It chucked it down and water streamed down the road in rivers. Pavements all impossible with wheeled luggage. But made it to bus stop and bus came early which was great.  In Valetta it became a real torrential storm and was so pleased I had opted for the bus. Cars were being stranded while the bus powered through creating quite a splash through the rivers of mud and water.