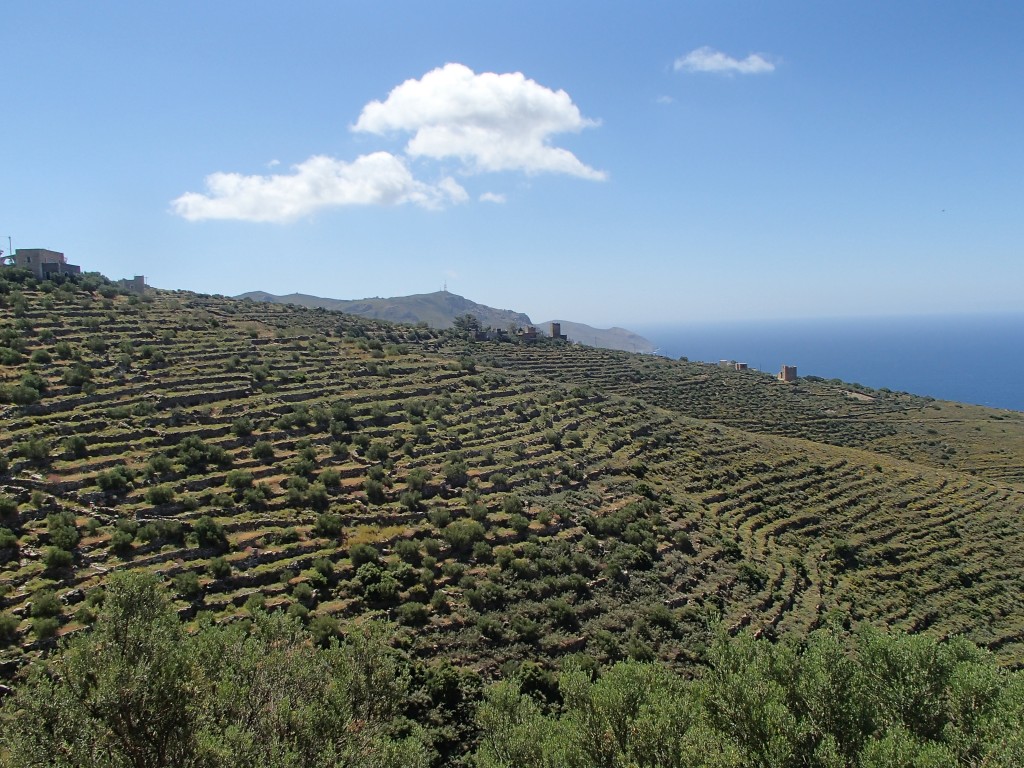 A short report on our latest motorbike trip. Destination was Southern Peloponnese, an area of Greece that I have never been to but Clive had a couple of years before with Jason Mardell. I have never been south of the Corinthian canal. Plan was to go through France  via The “route de Grande Alpes” to Menton, turn east and head to Ancona to catch the ferry to Igoumenitsa and then down to  a little place near Methoni called Finikounda where we had rented a flat for a week in the hills behind Finikounda, from which we were going to explore some more.

We headed off to Portsmouth and the over night ferry to Caens. Across France to south of Lake Geneva to pick up the Grande Route. This bit I had done but not Clive. Weather was great, in the 20s as we went up and down the various cols getting cold at the top and hotter as we descended. Spent two days on this bit. Great biking, not many people around as it is still early season for some of these cols and the highest were still shut. Thus no Col d ‘Iseran nor Col de Bonette. Clive started to get fed up with cols whilst I just love the scenery and could carry on for ever.

One whole day on motorway in Italy got us south of Florence and Siena. It was here that I heard that my latest grandchild was to be called Sienna ( double nn) ! Stayed in an agriturisimo…never down that before. It was in a converted wine cellar. off to Ancona and overnight ferry to Igoumenista. The next day we rode to Olympia, stayed in the village and did our sightseeing bit the next day. Lovely fertile area with plenty of fruit trees and plants of all sorts so you can imagine the healthy greeks who lived around here and see that this would be a good spot for sports. We are not too good at ruins and imagining but I could imagine the runners in the arena running on the baked earth from one end to the other, the crowd sitting on the grassy bank waving and cheering. Several temples later we headed off to our rented place in Finikounda.

We had to let the owner know when we got to Finikounda as the place was just outside somewhere. Thus we discovered that we  had arrived a day early and that he was expecting us the next day!! No worries, the place was empty. He , an aging Austrian, had arrived on an ATV so off we went following him on our bikes. We did know it was up a track but it was quite a tricky track on the bikes. Quite stony in places, sand in others but also a concrete section. Then a gate which had to be unlocked and then very steep up into his place. Not for the faint hearted.

It had a lovely view of the bay, plus point but the wifi  advertised did not work. He lived downstairs with a rather hidden wife. Whilst our flat had all we wanted, apart from the wifi, the coming and going was a bit of a pain, up and down this bumpy track and the locked gate to sort every time. We therefore tended to go out and stay out. Finikounda was very nice, beach, cafes and restaurants , shops etc. Every bar and café had free wifi too so communications could be maintained. This was important to me for shortly after we left my mother ( aged 85) became pretty ill with a urinary infection which was seemingly sending her insane. My sister was coping with it all.

We visited Methoni and its wonderful fort and venetian temple, we went all the way down the middle finger to Porto Kagio and stayed a very luxurious night in a fort hotel nearby at Kyrimai. The countryside changes as you head south down this part and becomes very barren. The locals still live in their fort houses and new ones are being built in keeping with this tradition. Obviously a great deal of marauding must have gone on in the old days such that they needed the defence of these houses. We went tripping into the Caves of Diros where you go in a boat through vast caverns in the limestone. We went also to Sparti where I climbed all the way to the top of the fort  at Mystra nearby. Clive likes to sit at the bottom on these occasions and I wave to him when I am up at the top.

The weather has been great for biking. Not too warm, in the 20’s. The locals were disgusted with the weather as it should have been much hotter. If it had been we would have not done the sightseeing we did but lain on the beach I guess. The sea water looked lovely but was pretty cold. Again if hotter it would have been fine. The greek economy is obviously struggling . Plenty of empty houses and neglect including the roadside verges which hung well over the road in places! Wonderful time of the year to travel as the countryside is green and the wildflowers are looking very colourful especially uncut!

We began to head homewards via Navplion where we spent a night. This is on a tourist route for again it has a great fort 1000 steps up a hillside. Up I went whilst Clive sipped coffee below. We had booked our night here via booking.com . Interesting spot which appeared approachable by vehicle but in reality was a round and round the town affair as it was effectively a pavement street. The bikes made it pretty close though and it was a delightful little B and B with breakfast brought to us on a tray in our room. Navplion also has a fort standing by itself in the sea which we did not manage to see as we had to head off the next day in time to catch the night ferry from Patras. I had never seen the Corinthian canal nor the lifting bridge…the one that goes down to the bottom of the sea when ships come and then lifts up out of the water after the ships have passed.

Ferry was long, Patras to Bari via some night stops. The so called Fast ferry was a bore and arrived much later than advertised. Anyway off we  went across Italy to the other side to take in a quick tour of Pompeii. Stayed in the town so that we could walk easily to the site the next day. Hotter now!

Its now very much homeward bound now and after a night near Pisa in a caravan on a campsite we had a speedy day on the motorway to get us well into France. It is now that I begin to realise that my chain and sprocket are getting pretty well worn. It was especially the front sprocket which had rather needle like ends. The chain was developing the tight and loose spots. It had done me well as it had gone all round Africa on our last trip in the autumn. I did have the bike serviced before we left and was told the chain would be good for the trip! I am also riding on an exciting back tyre bought in Nairobi called V rubber. I say exciting because it would appear to be especially slippery in the wet.

Taking life as easy as you can when riding a bike through the alps we did a few more cols…ones we had missed coming south…and headed inexorably north. Delightful night in the middle of France by a river and in the hottest weather of the whole trip. My chain lasted and has now been renewed. Funny thing is that I had a spare chain that I had carried all round Africa but did not take on this trip! In Europe there are BMW places so worst come to the worst we could have had it sorted in France. We did over 4000 miles  in spite of using the ferry down the Adriatic. Further than we thought. Good trip though. I rode my F650GS BMW and Clive was on his new BMW Adventure.