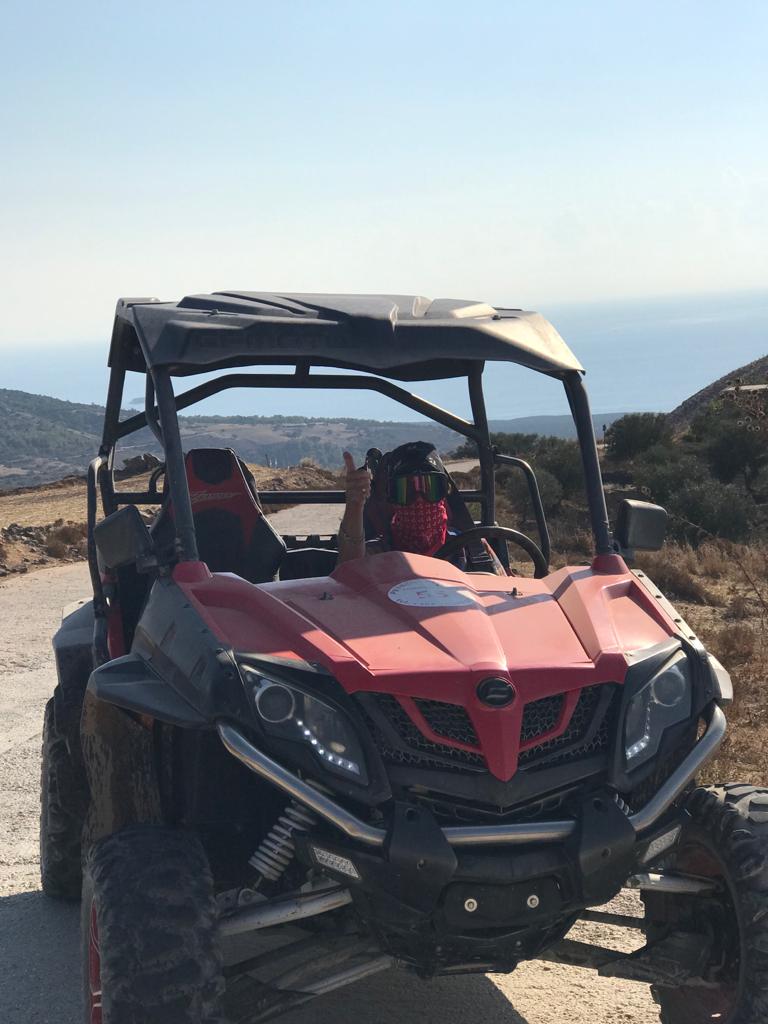 This was not a motorcycle trip, much as I wanted it to be. I tried very hard to hire a motorcycle but was thwarted by the fact that I was too old for their insurance. Apparently insurance cover was not available for those over 70 years old. I was 71 yrs old 2 weeks ago. However I am going to quickly record it here as it had elements of motorcycling and off roading.
I motorcycled down to Hampshire to stay with son Sam and family on 11th Sept. On Sunday a day by the sea at Emsworth and then  Monday morning early at 6am I set off for Heathrow on the motorbike. It was dry and not too cold and soon I was parked at terminal 5. As was the want at the moment I had all vaccination certs and health form for Cyprus uploaded to BA and thus had no problems except the usual at security that never seems to like what I am wearing  and I get frisked as usual.
Hire a car! 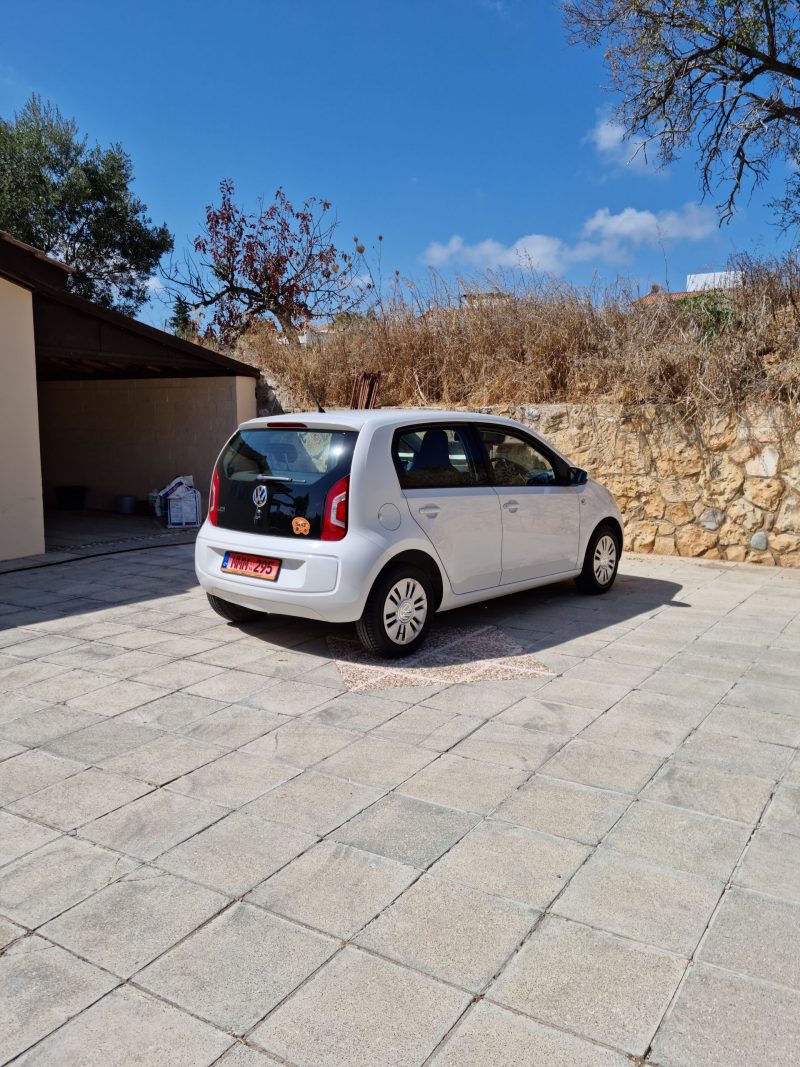 My little hire car…VW Up.

Such a shame but it had to be. Drive from Larnaca to Neo Chorio (near Latchi ) where very kind friends have said I can stay with them. I get a whole empty house to myself! They live in another  house on the same plot. 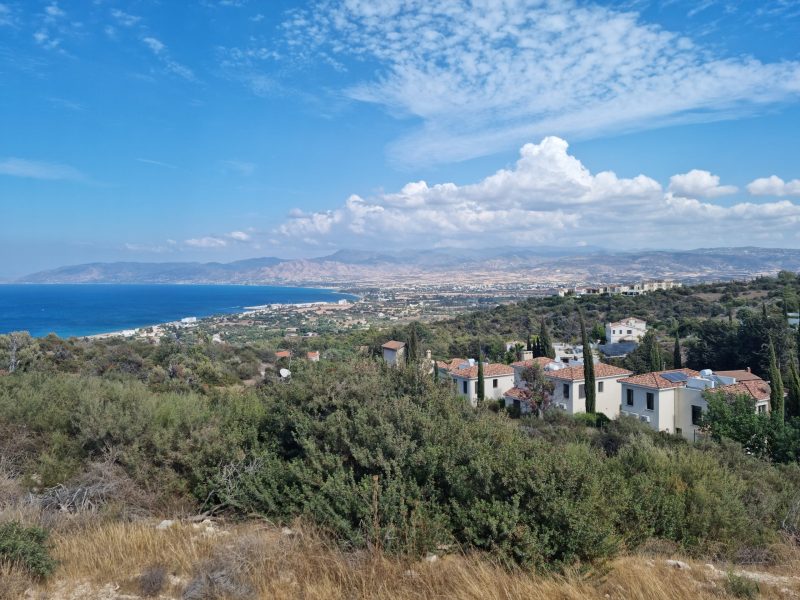 View from their house. There were some amazing views in Cyprus.

Tuesday
Swimming pool outside invites a quick swim  before breakfast. Together to Don and Jo’s nearest beach..Aphrodite  beach. Beautiful water. We float around and walk a bit. A day in the longed for sun,  soon passes by. This is what I came for, sun and warmth. August in Norfolk has been grey and more grey . Not seen the sun for weeks. In the evening we take a boat trip along the coast. It anchors up in a nice bay and we all jump off to swim around for quite a while until we are summoned on board for a barbecue. Really good fun and value. Boat is large and there are 50 or so of us on board. Many are Russian or East European. 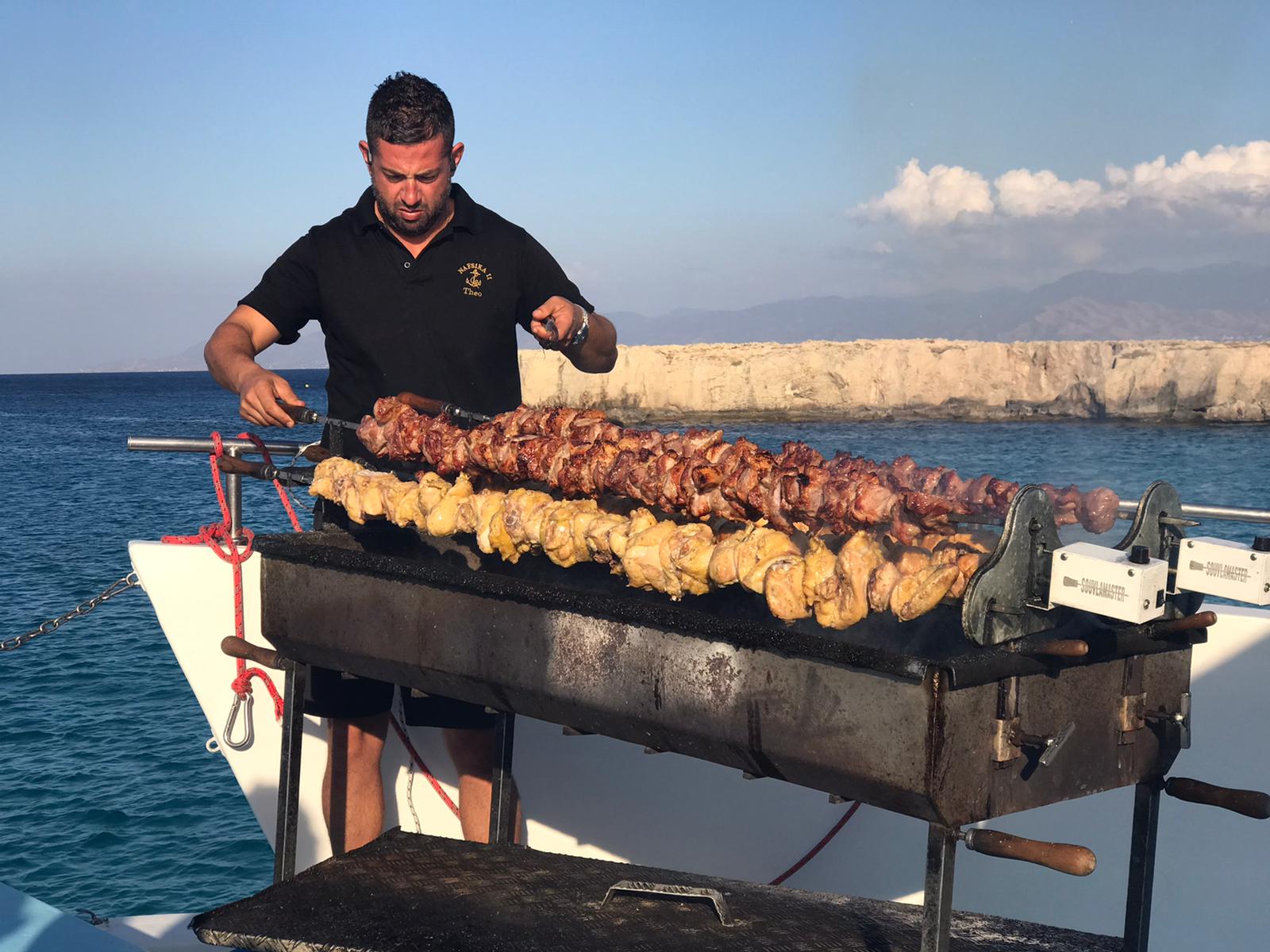 The barbecue on board…

Wednesday
However forecast was cloudy here today so it was decided to tour some typical Cypriot villages and see a bit of Pafos while Don has a quick meeting. Pafos is large and not a  tourist destination that would appeal to me. We head off to our first village , Omodos , up in the mountains. Most roads seem to top out at 600/700 m. Tourists have found Omodos but it is very nice and is busy feeding and supplying drink to them all. I am told that this looks good as tourists have been sadly lacking and Cyprus badly needs the tourists again. By the way, tourists in hire cars stand out because the number plates of the car are red as opposed to the normal local with white. I wonder if hire motorcycles might be the same? Do  not see many….or indeed any motorcycles. There are many good twisty roads so why is this ? Weather warm… We find a restaurant away from most tourists and have a huge mezzo meal.  Stuffed !
On to the next village  Lofou. Abandoned at some point…or nearly…which has left it in an original state. We wander and then off to next village , Kakopetria,  which seems in the direction of home on the map.  Still high up, it sits beside a river and the old part was very nice/pretty. One could take walking and activity holidays here. Cool in a hot summer… 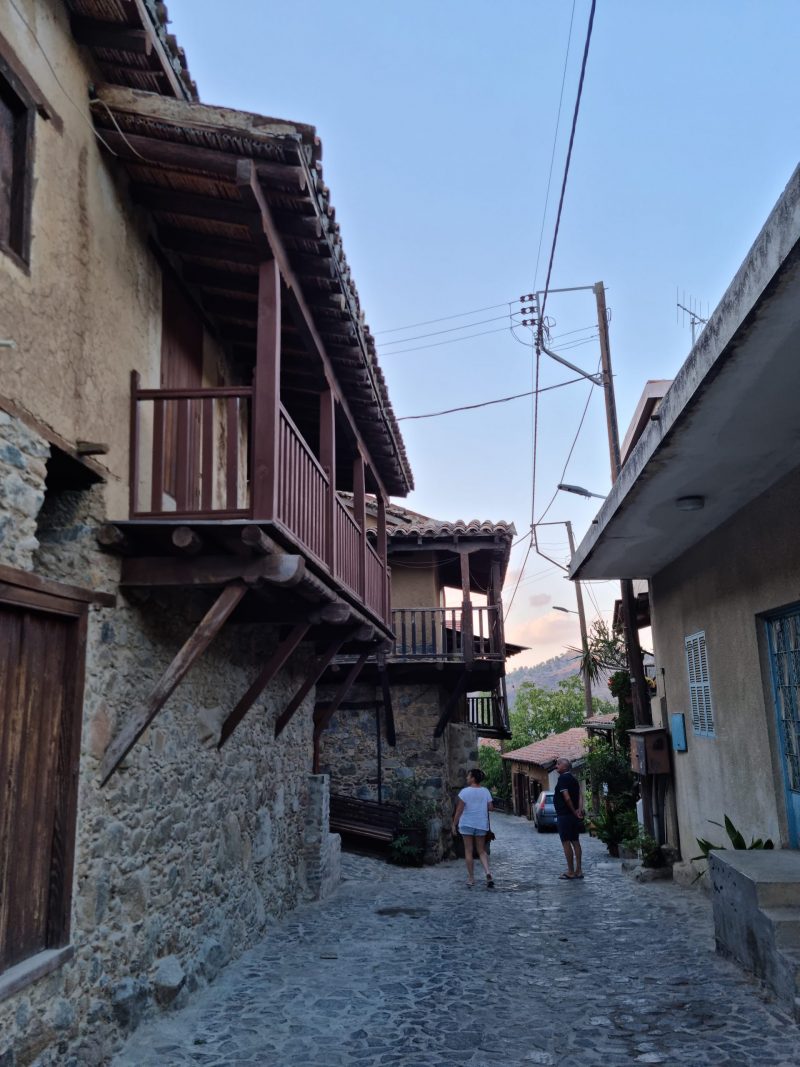 Jo and Don in Kakopetria

We could not drive northwards and home for this would take us on roads that either went into Cypriot Tukey…no go…or very twisty and sometimes dirt roads. So it was back in the opposite direction and round. Took 2 hours of Don’s quite fast driving.  He admits he is quite a competitive driver. Roads were empty, just very twisty. Jo was in the back having given me the front seat…

Thursday
This is activity day. We hire 2 buggies. I drive one, Don and Jo in the other. Don is a fast driver on the road, off as fast as he can go, and admits he is competitive! We are to drive off road…obviously.  I am going to be behind and thus in a bit of dust so hat, scarf and goggles . Great fun. Super dusty at times. We finally stop at a lovely beach called Lara. No tarmac roads to get you here  but nevertheless tourists in hired cars have made it inspite of being told by hire  companies not to go off road. They are slowly lurching along trying to avoid the worst whilst we charge along in our buggies which go over anything.  Feeling sorry for the suspension. 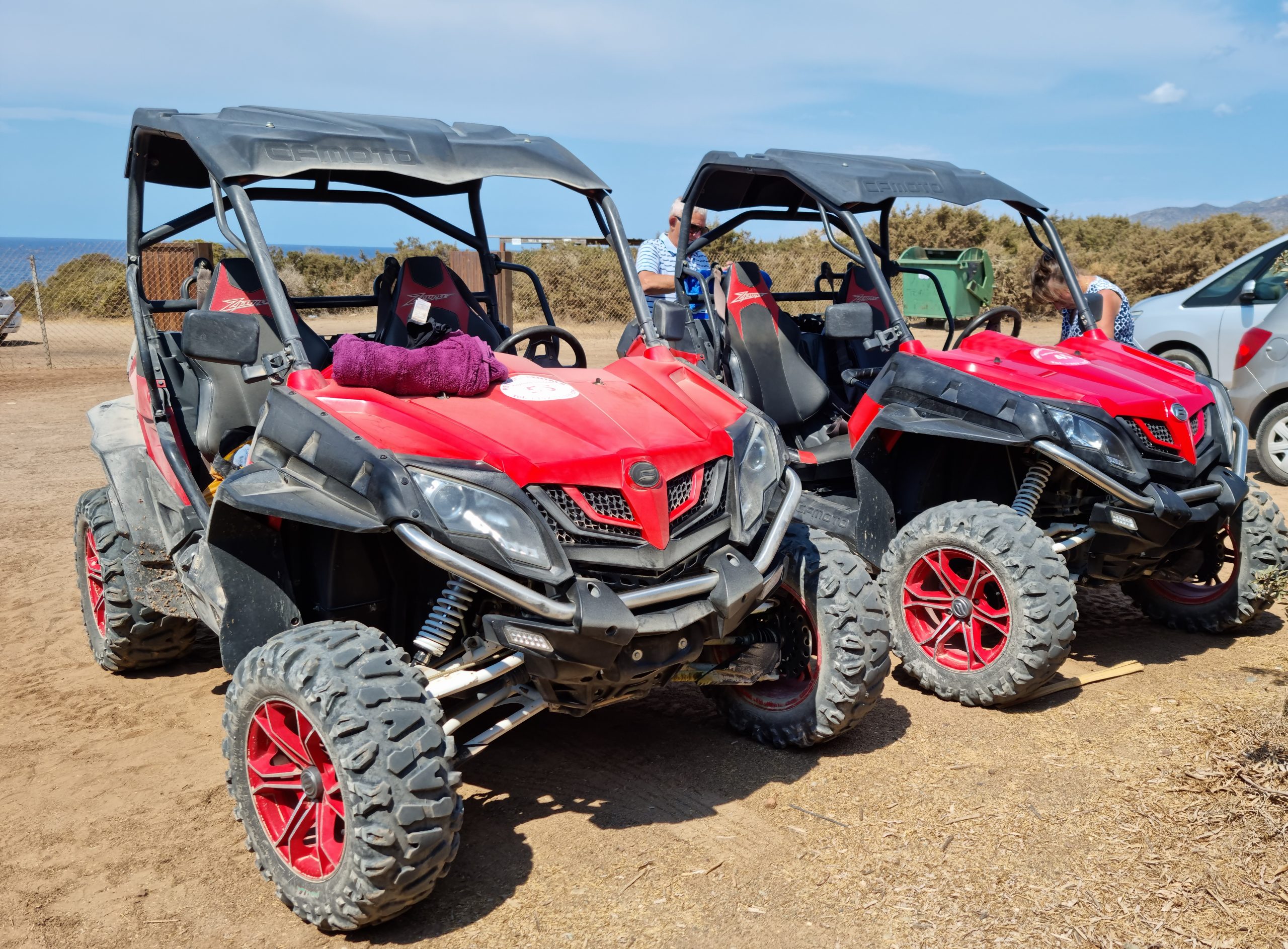 We swim …really nice. The beach is covered by turtle nests all marked by white cages up ended over them to keep them safe. 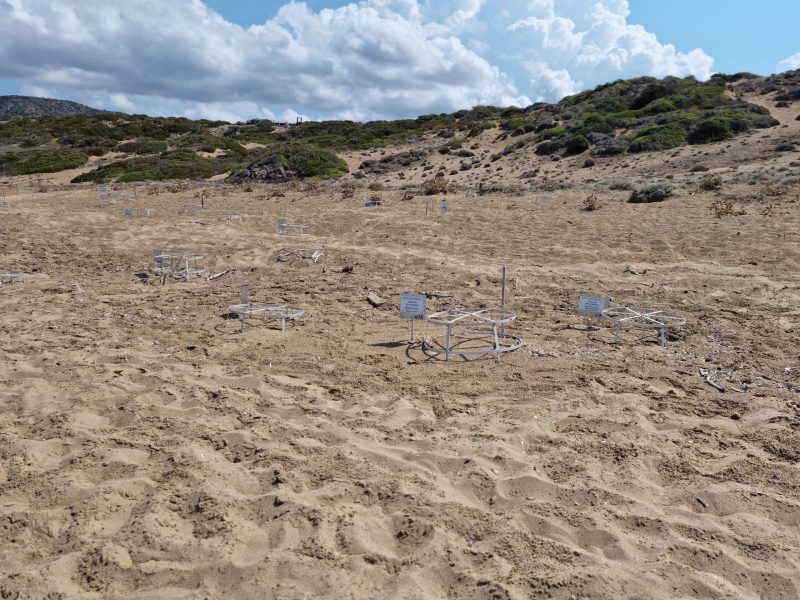 Turtles eggs under the sand under these cages.

Green and Loggerhead turtles. 7 weeks gestation  apparently  and will hatch any time soon. Would be great fun to see… But on we go to our lunch in a brilliant site on top of a hill/escarpment. Very relaxing in spite of phone call from Natwest!! Its warm, its sunny and just so nice. 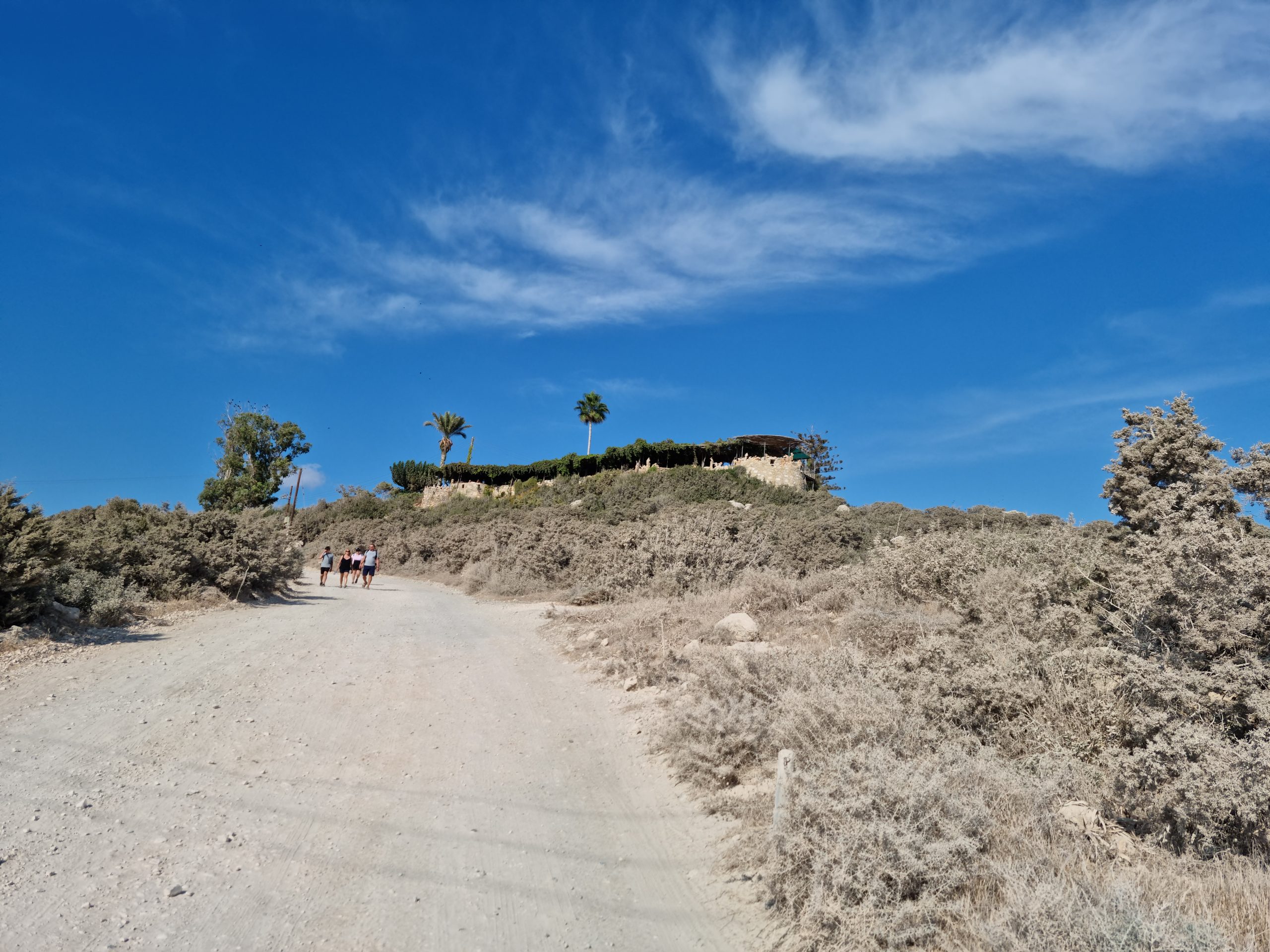 Head homewards. Don reckons I did good!!! Enjoyed the buggy driving. Makes up for no motorbike… 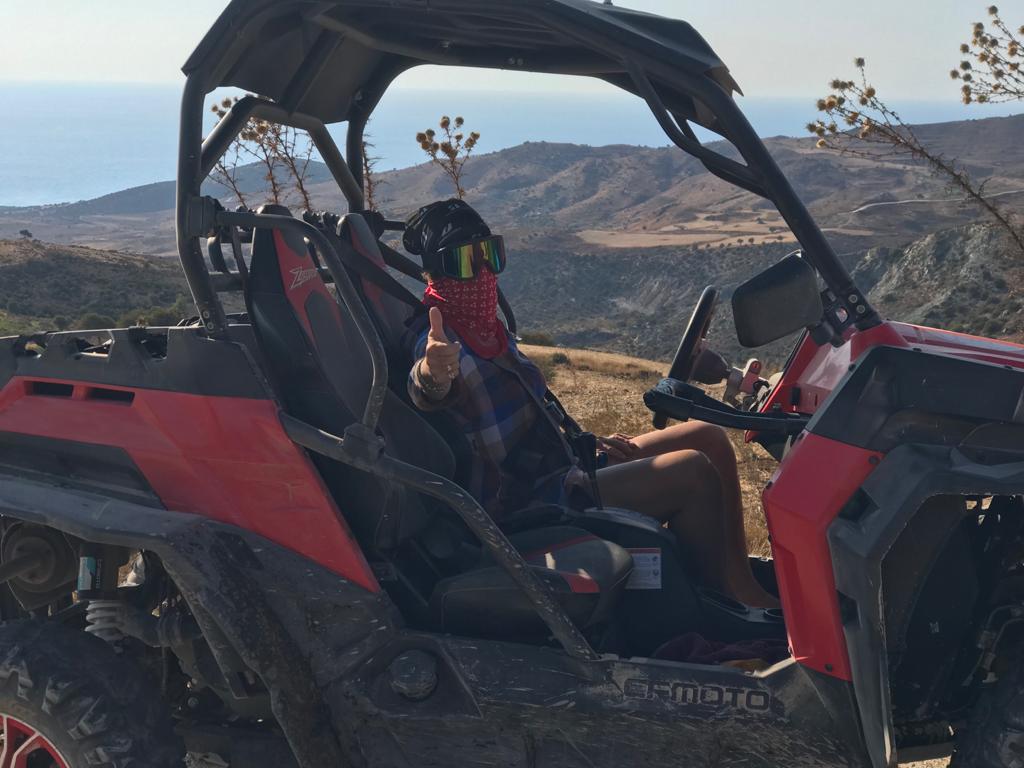 Friday
We have been busy so this last day is checking out the village above.. ( their village) and on the beach, taking it easy. In the evening we go out to a fish restaurant in Polis with some friends of theirs. She is from Sebastipol, Crimea, and he is Swedish. Interesting pair now doing homeworking from Cyprus for their jobs at a business specialising in making different cardboard  for different things from cigarette boxes and upwards based in Sweden. Home quite late!

Saturday
Slow start and after yet another excellent breakfast before taking myself to Polis to get the lateral flow test before flying. Done in no time at all and cost 8 euros. Back, packed and then off by slow road to Larnaca for a night in an hotel near the airport. Goodbye to the lovely Don and Jo who treated me so royally. Have had a lovely break in the sun…what I wanted. 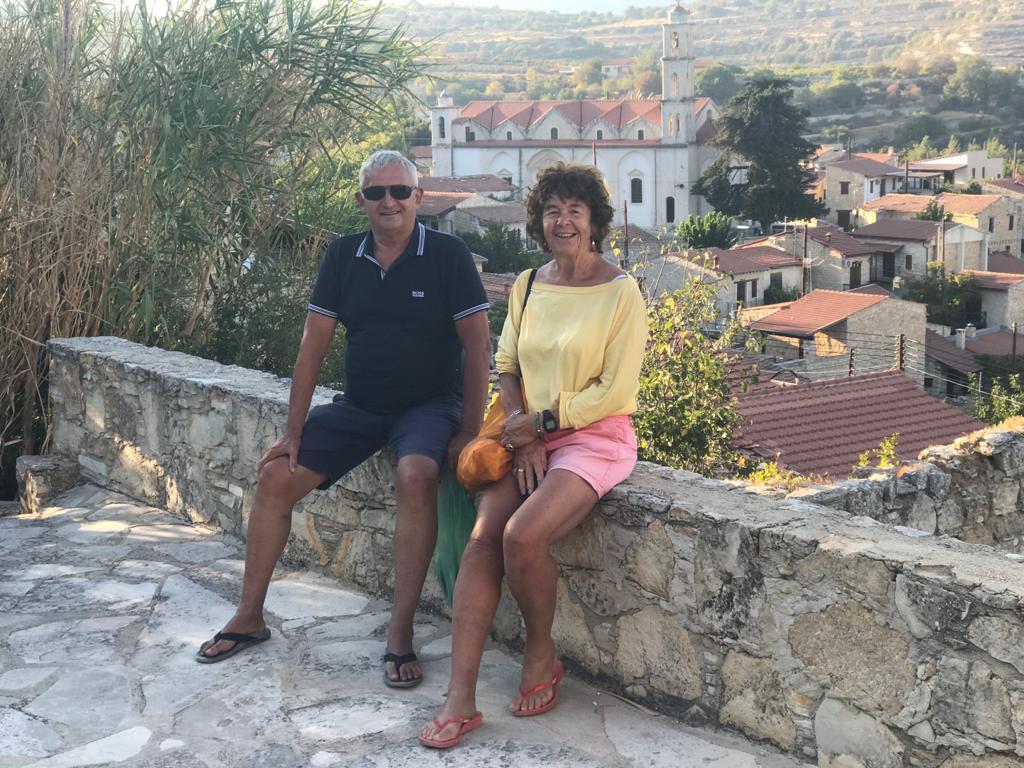 It was very nice to see Cyprus. Thank you to Don and Jo.