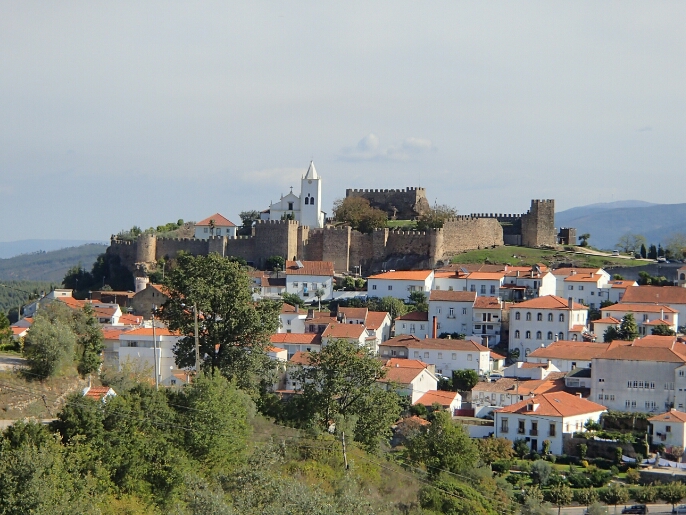 Have been really running to get what I want done before leaving. I fail on some but a couple I can finish on the way or later. Head off on the packed motorbike to Fakenham to meet Jo. We are both two people with too much to do. We should have caught up months ago. We spend nearly two hours catching up and then we both split…she to shop and me on my way to Sam and family in Hampshire. Arrive in time to see Heidi and Sienna to bed. Nice meal.

With Ems and family till I leave about 3pm to head to Portsmouth. Clive has been doing his own thing! Did not want to see Sam and co yesterday so was hopefully coming by to pick me up on his way to Portsmouth. It seems he is delayed so I pick the shortest country route and wander my way to Portsmouth. Clive gets there early and is waiting when I arrive. Straight on board and we settle down to relax as we steam to Santander.

Oct 10th Saturday
Ferry got in at 5.30pm and we had at least 2 hours to travel up into the Picos.  This was not our original  intention but we could find nowhere else to stay apart from an airbnb near Potes.  In the event they were full but passed us on to another spot nearby. Rushing off to eat as it was 8pm when we were arrived and organised we were amazed to find that restaurants only open at 8.30pm. We had forgotten! We came across the same opening hours in Argentina. In Portugal it is the opposite. …almost shut by 9pm!
Oct 11th Sunday
Still dark at 8pm.  Breakfast at 9am. Off at 10am. Everything later….. Clive leads with some town in his Garmin. It becomes evident that the Garmin and/or Clive have gone wrong. We end up heading up into the Picos again  and smallish roads. Very scenic but weather not that great with drizzle. We spend  a fair amount of time doing a bit of a loop but lovely scenery and villages AND a very good lunch spot at about 3pm.  (Lunch later too!).
Make it to Ponferrado.  Spend hours looking for hotel as many full, it drizzles, Clive determined  to hate searching, or hotels too expensive. Settle for an expensive option as running out of time. Cannot work out why Oct 11th should mean full hotels in this town. It does have a Templar castle but it is not tourist season surely?
Oct 12th Monday
Now know that Oct 12th is Hispanic Day, hence today is a holiday and the whole weekend has been a holiday for the Spaniards. This place Ponferrado reminds me of a welsh mining place. It was famous for coal and slate mining but of course the coal mining has all gone bar the ruined mine heads etc and the black hillsides. Slate mining continues.  Ponferrado had to reinvent itself.
Weather still not great but we hardly get rained on in spite of black clouds. Enjoy some great roads and natural scenery as we head West and South.  Cross border near Chaves and end up in Guarda for the night. 220 miles of great roads and many bends. Hotel on edge of town. .Hotel Lusitania!
Oct 13th…16th
We had a quick look of historical Guarda before heading off south and westwards to Clive’s place near Penela. Uneventful ride with good scenery and main roads. Weather cool in the morning but became pleasant.
Last few days trying to wind down! Still too much activity from Uk! Sun nice but pool cold. Walked up one hill and will do another before too long. Several things here for Clive to see to and he soon has me at work. I am happy enough as I love mending things!. With pleasant weather its nice to be outside fixing things. Next it is cutting back a fig tree…

October 17th Saturday
Today I am going to be setting off to Malaga where I am going to have 3 days with Trailblazers while Clive stays in Portugal seeing to things. We wake up to a very windy day with showers. I manage a climb/walk while Clive shops. Strawberry tree has its fruits and flowers, the hillside is covered in wild thyme ,marjoram and purple crocuses. Confusingly orchids seem to be coming up…in the UK that would be in May/June. Its really windy on the top…Head back. …its taken about 40 mins… with black clouds coming up. I run down the hill to Clive’s place as the rain starts. 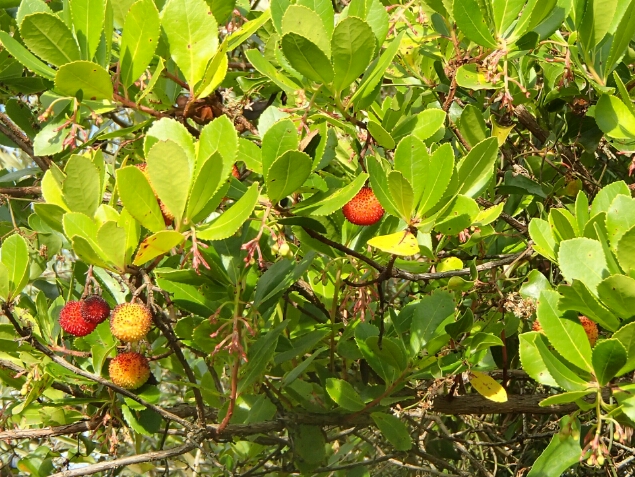 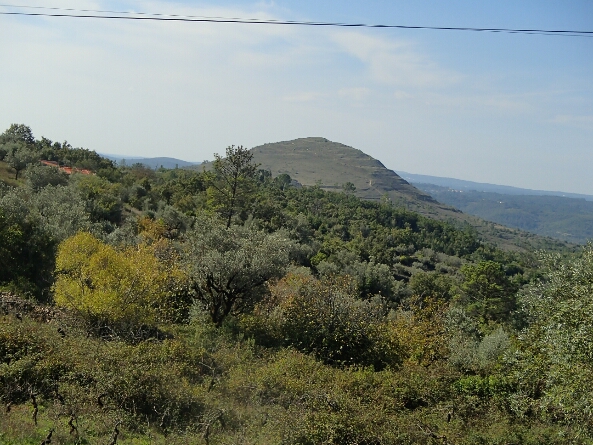 Leave about 2pm for Badajoz. Take straight line route. Fantastic second half on N2 and then onwards on straight empty roads. Hotel in old centre of Badajoz. Take walk down to the river and old ( now pedestrian ) bridge. Eating is so late..after 8.30pm! No rugby on portugese telly.
Oct 18th Sunday
Pouring with rain. Still really quite dark at 9am . Straight road and empty. Rain stops but then all day its on and off. Traffic minimal so get along well via Cordoba to Malaga. Take a shortcut above Malaga and get first dry road and bends of the day. Trailblazers are in a small village above Archez. …called… Canillas di Albeida. Find hotel, find Trailblazers.
Oct 19th Monday
Spanish time so breakfast at 9am and start at 10am. Only we didn’t as the Trailblazer garage was burgled in the night, the thieves stealing 3 bikes. They seem to have plenty more but they stole the boss’s.. ! So while Graham dealt with police we..being a young Swiss/Phillipino and me, were told no biking today and so we wandered off to the next village on foot. There we whiled away cafe time,looking at retired Brits and other leisured people. Walking back I was fascinated by all the fruit trees including some lovely unripe avocadoes dangling ,over ripe pomegranates, figs and olives. Great views too of white houses dotting the hillsides.
Back to the Posada and reading ! All a bit of a shame but if I want to relax then I have got it.! Listen to two poor caged birds tweeting away and the church bell that tolls every quarter but not at night mercifully.
Oct 20/21st Tues/Wed
We get out trail riding. I am kitted out in “armour, knee pads and shirt”. Luckily have my own boots as they have none small enough. Trousers were okay. My gloves. They do get ladies but they must be bigger than me! The bike is tall! The best is at the limit of my tiptoes. Fine going along but difficult when trying to stop or put a foot out on tight corners like the men…it doesn’t work! Bikes also needed bump starting some of the time as they had tiny batteries. Obviously need to stay upright and keep going. Second day I dropped it setting off down the hill to bump start it and then later dropped it riding into the edge of the track. It was quite hairy riding on tracks with straight drops down the hillside…it held one back from practising cornering techniques!! Views were lovely and villages sweet. Weather held and was perfect. We were joined on day 2 by a Norwegian who was far more experienced than Manuel or I. It would have been good if Graham had given us a few tips!
Got my bike to the hotel on Wed night down the narrow streets so I could go off early.
Oct 22nd Thurs
Set off in the dark at 7.30am. Head wrong way on the twisty turny small roads out of the village. Sort myself out and it took a while in the dark down the mountains to the coast road and then off back across Spain to Lisbon to see Katia our Portugese plum picker of several years. Long day and 400 odd miles but in good sunny weather. Cold in the morning..sometimes down to 8c …but gradually rose to mid 20s. Stay in old centre in the hotel where Katia is currently working…”Palacio Vila Flor”
<a href=”http://www.ninaplumbe.co.uk/wp-content/uploads/2015/10/wpid-20151021_120510.jpg”> 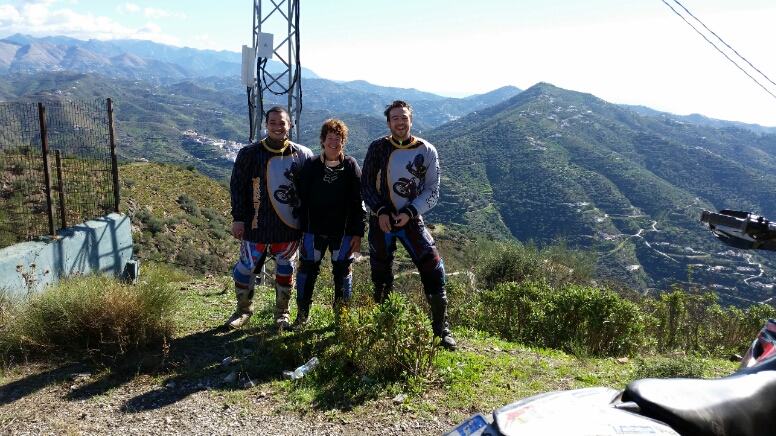 Oct 23rd Friday
Late start and head back to Penela and Clive. Nightmare getting out of old Lisbon. My gps was getting it wrong and tramlines did not help biking! But found motorway in the end and boring ride to Penela. Clive pleased to see me. He has a very noisy mini digger at work eliminating some steps which means digging down into the bedrock.. rat ta tat, rat ta tat etc. Lorry load after little lorry load of rock carted away. We go out to a good restaurant… so cheap.
Oct 24th Sat.
Mini digger digging in to the rock all day. The man works from 9.30am till about 7pm. It pours with rain all day but on he goes. We look forward to watching the rugby ( Aus-Nzl) but some way in there is a power cut! Back on for a bit and then off.
Oct 26th Monday
Nice day yesterday. More little jobs and today we tried to buy some fresh pressed olive oil but after much hanging around at the cooperative we were told to come back tomorrow. The in take pit did not work that quickly so through put is quite slow. Customers arrive in their little tractor and trailers, empty their olives into the intake pit and then wait for their olive oil to come out the other end. Most keep their produce ie the oil, so hence none for us. There was a lorry load sitting there and that we are told is going to be for sale. We shall see at 11am tomorrow. Looking at what was waiting to be pressed and the speed of it all I think they will be working all night! Had some quite impressive machinery there and large electrical generator for the electrical masher etc. 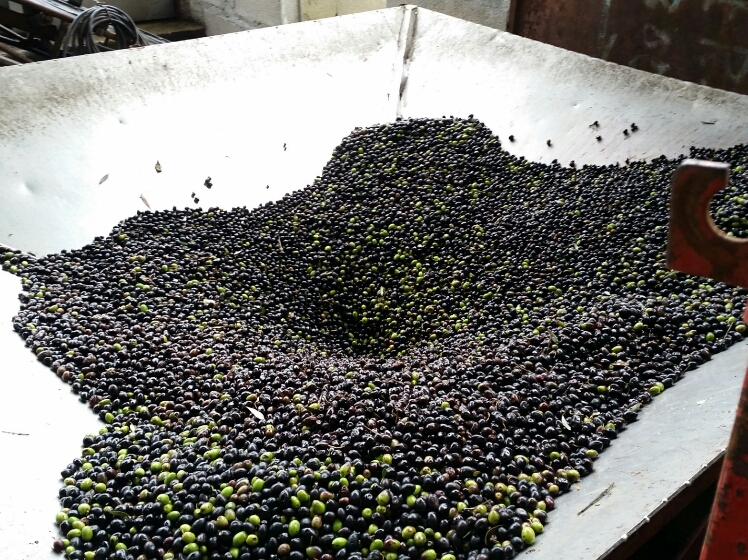 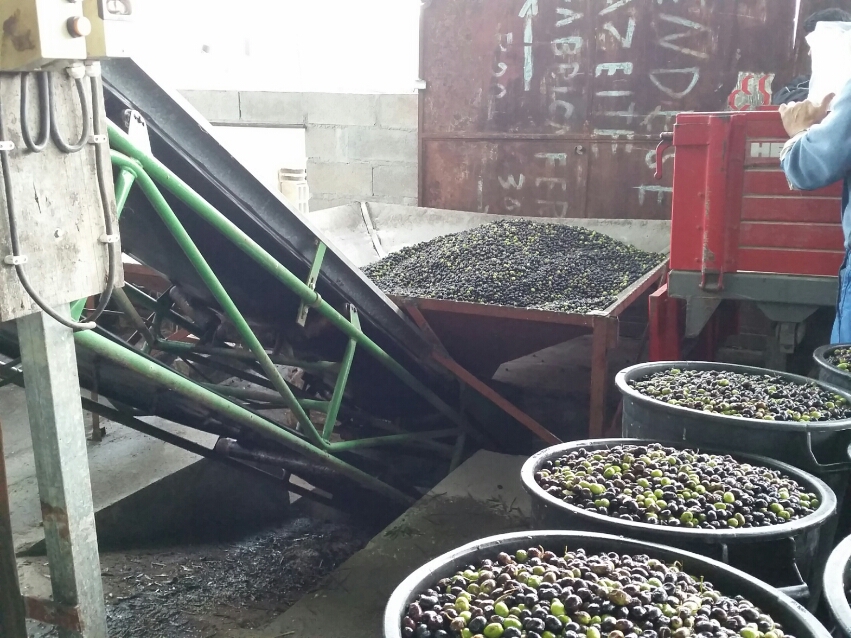 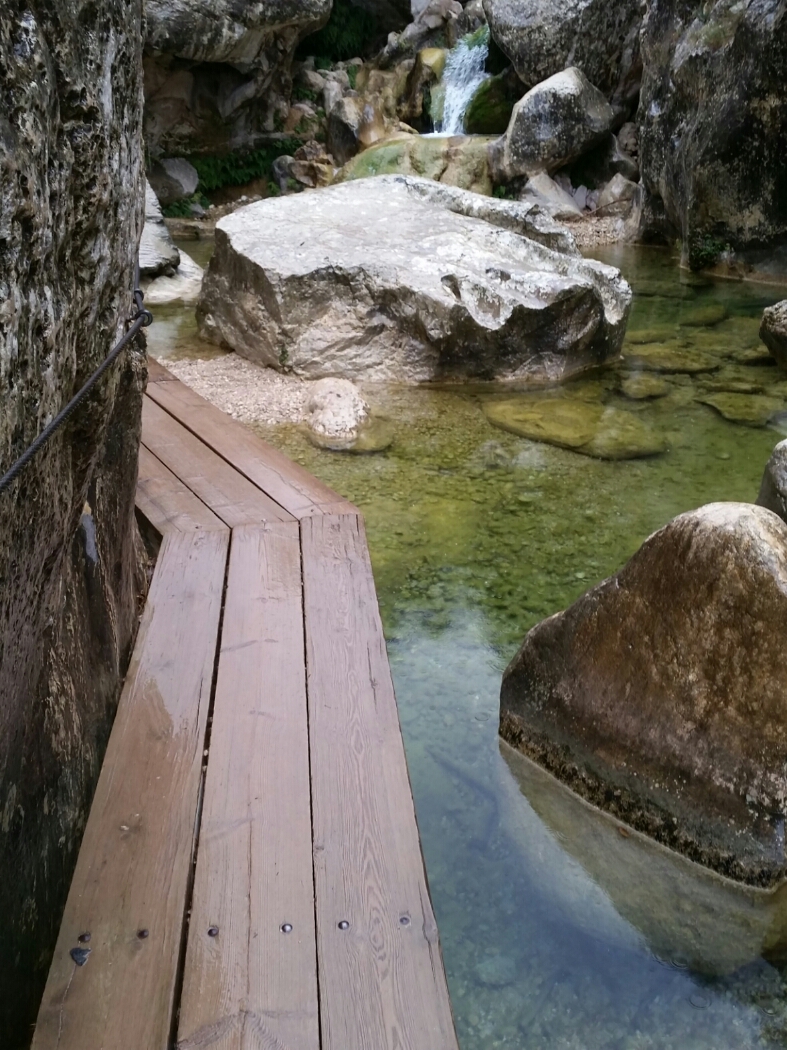 Off we went fully waterproofed. Initially the rain eased but round Zarajevo it pelted and the water really got in to my clothing via my neck. Gloves getting wet too. We were on dual carriageway at this time and the surface water was not easy to see. At one moment my feet were knocked off my foot rests by water. Dangerous. Clive was having big problems seeing through his specs as they had steamed up and had raindrops on them, so he was looking through 2 sets of raindrops..visa and glasses. It was like a tropical storm. We at last found a cafe place where we dripped a huge puddle and recovered a bit.
Later it eased and we reached Corella. The weather/rain was main news on spanish tele that night! Our wet clothes were strewn round the room 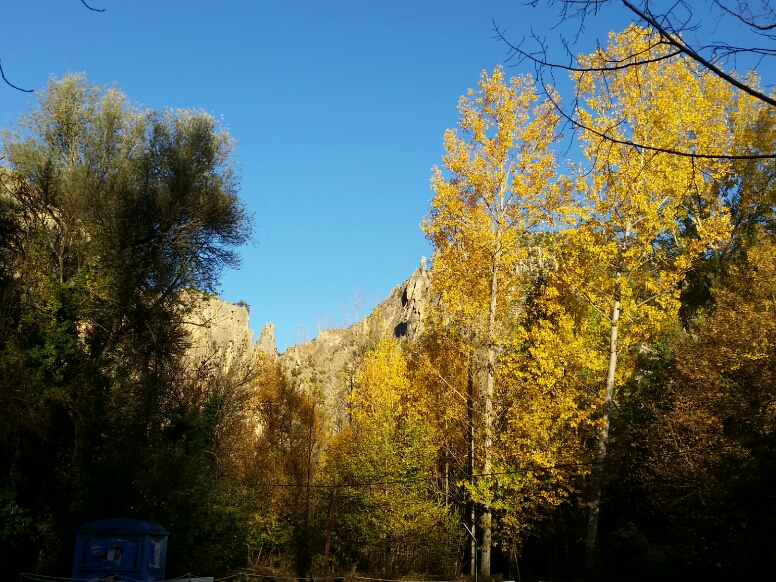 November 3rd Tues
Clothes drier but gloves still pretty damp. Our hotel was modern and good. Bit like a private formula 1. Cafe/restaurant next door was friendly. It drizzled on and off and was cloudy and cold. Clive had gone for an hotel pretty near Santander more by mistake than on purpose. Nice road, the N611, parallel with the motorway. Our village, Helguera, was just off there. Earlier meal than usual which was good as fed up with the late supper hour.
November 4th Wed
Mooched off to the coast to sit around till ferry departure time. Found sun and sand at Pielagos near Boo de Pielagos. Off to ferry early and join other bikers in the bike queue. Home we go..