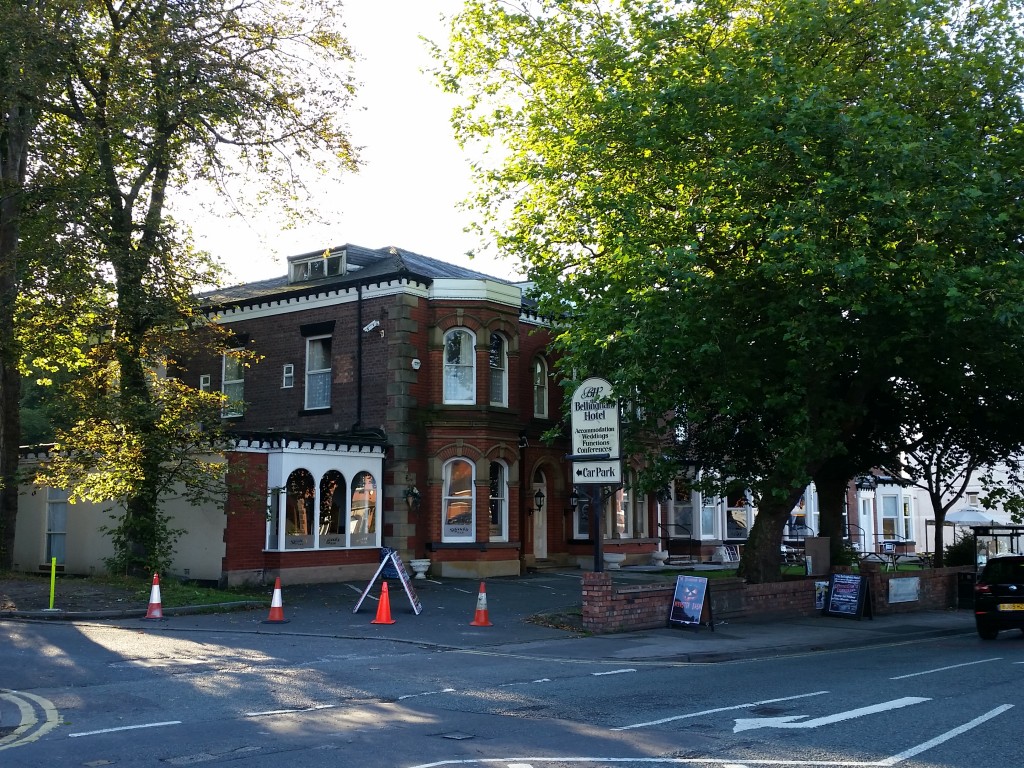 I have longed to do this walk but never found the space till now.

Something a bit different but something I want to remember. I have driven here in the car! Norfolk to Wigan via Sleaford, Newark,Mansfield,Chesterfield, Buxton,and Macclesfield to Wigan. About 200 miles and it took 5 hours. Possibly different route back….

I am walking for 3 days. But I am taking mh bicycle…I have never walked 18 miles in one day and that is what has to be on day 2 because of lack of place to stay. So I am going to push or ride my fold up bike as well. It is easy to push. The first day is about 9 miles plus 2.4 from my hotel to the start.

My hotel,  the Bellingham, is a down market large place. I booked a single room but have been upgraded without my knowing to a suite! Huge bed but old fashioned decor. All for £25 for the night. I go down the road to eat. I find Papa Luigi’s. Its full and noisy….Saturday night.. but friendly. I watch brassy skinny blondes, fat blondes and very made up females and their men. Loud and raucous, having fun. All females have very high heels, fat and thin and many wear tight jeans with their heels or black leggings. Can’t say they look great…

Breakfast at 8am…the earliest they did it. Ate in isolated splendour in the ballroom or at least where they hold functions, The dining rom was out of action In the end I got a good hot breakfast.

Leaving my jacket and waterproofs behind in the car due to the amazingly good forecast I grabbed my cycle and cycled off down the hill and then up to the top lock. This is the only bit of cycling I am meant to do today . I intend to push my cycle beside me. Its a very light fold up bike with short handlebars. In the event it works very well and it is my security in case I really cannot make it tomorrow when I have to cover 19 miles. This is due to the lack of places to stay along the canal.

Having got to the top lock it was then great to walk down all the locks into Wigan. It is quite a sight A look at Wigan Pier and the history there and then the serious walking began.

There was a lack of cafes or pubs. One or two were closed or derilect, one only opened later…. But the weather was glorious and after only a short while I was in my t shirt.. Lack of wildlife but fun canal boats and locks where I rested given half a chance. I covered 11 miles on foot. ? Legs tired but knee holding up well.

Headed back to the canal the way I had come via a footpath across a field, and continued along the canal. The path deteriorated in that in 3 sections it was overgrown. I got soaked with dew as I pushed my bike and fought with the vegetation. It was quite a struggle. There was a path on other side that was better but until I got to a bridge I could not enjoy it.

My legs felt tired in different ways. It would be hips for a while then I would be conscious of my feet and then my knees. I was trying very hard not to cycle . In the end I tried to walk more than cycle. With 18.5 miles to do I thought I would try for 11 miles walking like yesterday. The morning went pretty well. Nice stops, even a cafe at Burscough. Sat in the sun near the chicken sign and read my book….bliss. Good Saracen pub stop with the most expensive (swedish )cider I have ever bought at £4.50 for a small bottle.

Burscough and Halsall are where the canal was first begun in 1770. Plaque in the wall between bridges 23 and 24 to denote the start. All interesting.

The afternoon then started to wear on as my legs tired and it seemed quite a long way still to go. Was amused at one bridge crossing when I saw a car with the number plate MR5 I NAG. It was being driven by a lady !!

Any way, on I went. I walked my nearly 11 miles and then took to the cycle to the end which was infact at 22 miles before arriving at my Park Hotel near Aintree. It seems to be a place where minor business men stay. Not a couple or woman in sight, The other nights were more normal…

The canal is well used in most parts. Some parts the weeds do quite well, other parts clean as a whistle. Odd bits float in the canal…rubbish, which is a shame Many houses that border the canal make no jse of it, having high fences and no access gate. Seems a shame. In other parts people are getting great pleasure from messing about on the river/canal. I loved the slow pace of life, its one of the things I came for.